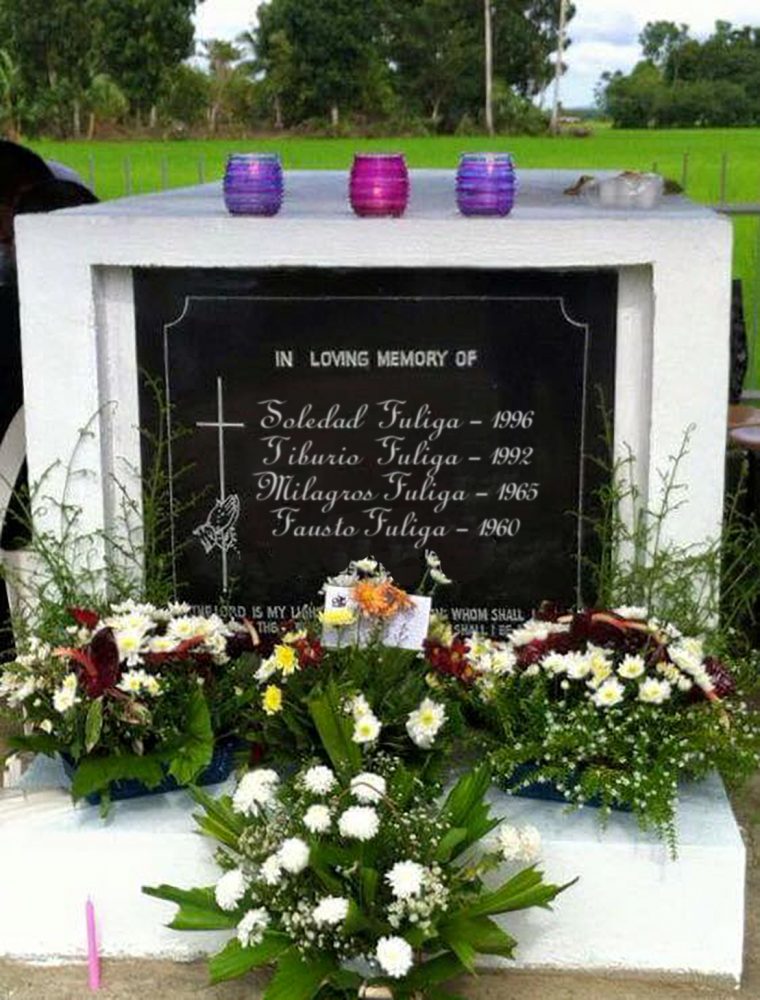 Candles and floral arrangement adorn the grave,typifies Filipinos undying respect and reverence for the dead.

Afternoon overcast sky and isolated showers did not deter the Fuliga family. They’ve been doing this since Juanito, the head of the family, was aged two. Back then Juanito was still too wobbly to walk, getting by narrow pathways in between congested tombs. Accompanied by his parents, he was led to a concrete enclosure repainted in white where the remains of his grandparents lie at rest. Juanito was too young to even remember the details of his first trek to the Dumalag town cemetery. Thirty-five years ago today, different steps trod the same path. Flip-flops and sandals now belong to his wife and two children, aged eight and four. The tomb now contains the ashes in two separate wooden urns belonging to his parents. On the facing slab writes, “In Loving Memory of Tiburcio and Soledad Fuliga”, Juanito’s parents, and underneath inscribes his grandparents’ names, Fausto and Milagros, years of death written next to their names separated by dashes.

“Mahal ilatag mo na ang ang mantel sa lamesa,” (“Dear, you may spread the tablecloth on the table,”) said Juanito to his wife, Jasmin, as he was getting the folding table upright, “gagawa ako ng bubong natin at baka umulan na naman” (“I will setup a makeshift roof over us just in case it rains”) declared Juanito, unwinding the roll of four-by-four meter blue tarpaulin with four edges tied with nylon strings. While the kids were busy playing their toys, sitting crossed legs on the bamboo bench that Juanito built two days ago, Jasmin helped her husband hoisting the tarpaulin on top of the bamboo joist supported by two pillars. Nylon strings bound individually to each peg in four quadrants, the makeshift tarpaulin roof was finally erected. Jasmin planted three candles upstanding on top of the grave and illuminated them one after another. Smoke bellowed and the unmistakable smell from the burning candles hovered the air as everybody lit their candles up. 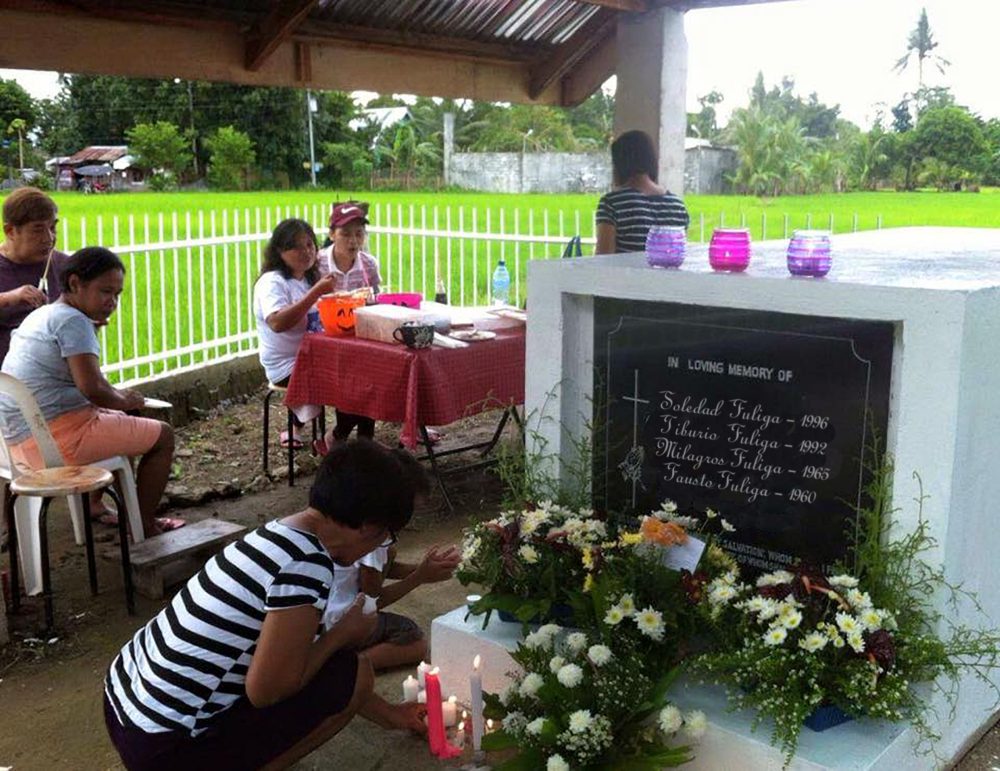 Typical scene in the cemetery on All Saints Day where family stay together honoring and remembering their departed loved ones.

“Ilabas mo na ang mga baon natin, mahal,” (” Please setup our snack, dear”) Juanito commanded his wife, “ako na ang gagawa ng kape” (“I will be the one to brew the coffee”) he said. Obligingly, Jasmin unpacked a rattan basket, took out two plastic containers brimmed with homemade kakanin (native delicacies), one with palitaw (sticky rice floats) and the other with suman (glutinous rice rolled in coconut leaves). Juanito unlidded the thermos, poured brewed coffee into four styro cups and stirred them as evaporated milk and brown sugar were added. “Tara na mga anak. Magdasal muna tayo bago kumain” (“Come on, kids, we will all pray before eating”) Juanito urging his two kids. Everybody gathered around the table, made the sign of the cross and Barbara, the oldest daughter, recited the grace. The prayer segued the culminating portion of “undas”, where everyone grabbed a recyclable plate, filled it with kakanin and ate away enjoying their undas treats. Somewhere nearby, folk music emanating from a boombox dominated a hodgepodge of giggling kids, intermittent outburst of laughter from a group playing a henyo game, and intrepid pitchless singing from a beer drinking crowd. Undoubtedly, the atmosphere was festive, celebratory and joyous.

As darkness enveloped the cemetery, Juanito gathered his family by the national road right outside the cemetery’s primodial arch entrance, waiting for a tricyle to take them home. For one last time Juanito looked back, training his eyes at the blurring image of the projecting tombstone some thirty meters away, belonging to his family. “Next year agahan natin para mahaba ang panahon natin mag-undas (Next year let’s do it early so we can stay much longer)” he murmurred audibly to himself.

17 November 2017   From the Desk of Eugenio Michael Plana Filii Sancti Dominici Philippinensis, Inc. Quezon City, Philippines   Greetings of Brotherhood and Fraternal love to all my fellow brothers of Filii Sancti Dominici! Many years have passed but the call still rings in our ears.  We can still remember when we heard […]

Saint Patrick’s Day in the United States has been traditionally regarded as “booze day” every particular weekend in March, that the public have been so used to the police and administrators of the metro urging folks to take the trains instead of insisting to drive home; and never to take drinks with them into any […]