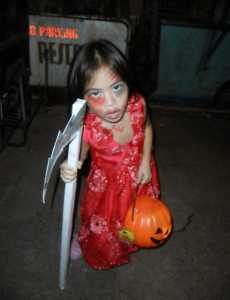 Little Mikay showing off her axe of death and pumpkin basket. She’s ready to prowl the street trick-or-treating on the eve of Halloween.

In the corner of Gov. Pascual and Goldendale Avenues, in Malabon, traffic screeched to a halt as gaggle of kids wearing spooky costumes knocked on private car windows, spoofed at motorists declaring ‘trick or treat’, oblivious to the danger of being squished over by moving vehicles. Some kids jumped at public jeepneys, one frailty hand dangling from the overhead handle while the other spreading wide open towards the passengers, relentlessly asking, begging, even demanding. Some passengers looked away ignoring the poor kids. But beyond the callous ones, others showed kindness, reached down to their pockets and purses and produced some change. Other kids swarmed pedestrians, chased and ganged them up for treats (or money) before they could cross the street, where in the other side different group of ghouls, goblins and kobolds await preying on their victims. 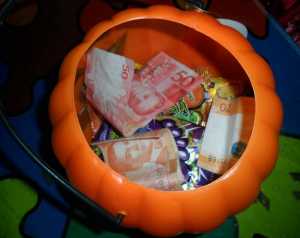 Two hours later, back in their house, Mikay excitedly emptied her pumpkin basket full of treats and some cash. “Inay, meron na akong pambili ng bagong damit sa Pasko.” (“Mom, now I have money to buy a new dress for Christmas.”) she said waving twenties and fifties in her hand. There goes the story of Mikay, one of the many that came to life on the eve of Halloween in the Philippines. There are certainly many more identical stories but Mikay’s is sufficient to capture our imagination. Despite the children’s creative choice and effort in selecting and fabricating their costumes and the time they’ve spent painting their faces and bodies to make them scary trick-or-treaters, the event pointed ostensibly to the material aspect of Halloween. At such young age, Mikay consciously valued more her stash of money over her treats of candies.

There are many catchwords that this pandemic has given birth to, which in turn describes our present lot. Some of the words are quarantine, lockdown and new normal. However, I would like to propose another word: re-imagination. This is not in any way longing for a future utopia after this pandemic passes, but a sort […]

Welcome to the December Edition of Epistoliorum! Learn from the business success of our Fray in Focus, Eugenio Michael Plana who has used as his life guides the charisms of The Dominicans and attained spectacular success in various businesses he embarked on. Outwit hackers by learning from Fray Joel Gabriel how to make and maintain […]