In Canada, Halloween is observed every year on the night of October 31st. The fete was brought to Canada sometime in 1800s by Irish and Scottish immigrants. It was thought to have originated mainly as a Celtic celebration marking the division of the light and dark halves of the year when the boundary between the living and the dead was believed to be at its thinnest, bringing up customs, such as wearing disguises to ward off ghosts and offering food to appease malevolent spirits, hence the emergence of trick-or-treat.  The first recorded use of disguise on Halloween was in Vancouver, British Columbia, in 1898, while the term “trick or treat” was first heard in Lethbridge, Alberta in 1927.

Celebration of Halloween became increasingly popular for both kids and adults in 1990s, making it the most commercially successful holiday after Christmas. However, people prefer Halloween than Christmas due to several reasons. Halloween is more subversive, one of the reasons why many find it more enjoyable because there is less expectation, short preparation, no set of rules to follow, no set meals to be made or enforced family gatherings to host. It is more fun during Halloween because it allows us to get in touch with our inner child, have fun and dress up like it is nobody’s business. People don’t worry about celebrating Halloween, nobody frets about being lonely, heartbroken, alienated or bereft. As long as there’s candy and some trick-or-treating for the kids, Halloween will be a success. It is this lack of idealistic goals and expectations that actually enable us to enjoy Halloween a whole lot more.

In North America, kids do their trick-or-treating in their respective neighborhood. Households lavishly decorate the front entrance of their homes. Some households go the distance transforming their front yard into a graveyard or burial ground where blood-splattered casket marked by a broken cross by its side is dug halfway down showing only the glass window where an eerie mummified looking head sticks out. Flickering lights interspersing different colors, hair-raising hounds seemingly emanating six feet below the ground, multiple ghostly-robed standees… these are only a few of the common sights you will encounter during Halloween in Canada.

Canadian households invested amply on Halloween treats. They purchase and dump wide varieties of candies and chocolates into their primordial witch jars or pumpkin baskets, sit cozily by the door fully dressed in their choice of unthinkably creative costume, and personally oversee the handing out of treats where at the spoof of “trick-or-treat” gobbets are given away. This picture pretty much sums up what we can expect during the night of October 31st in Canada. 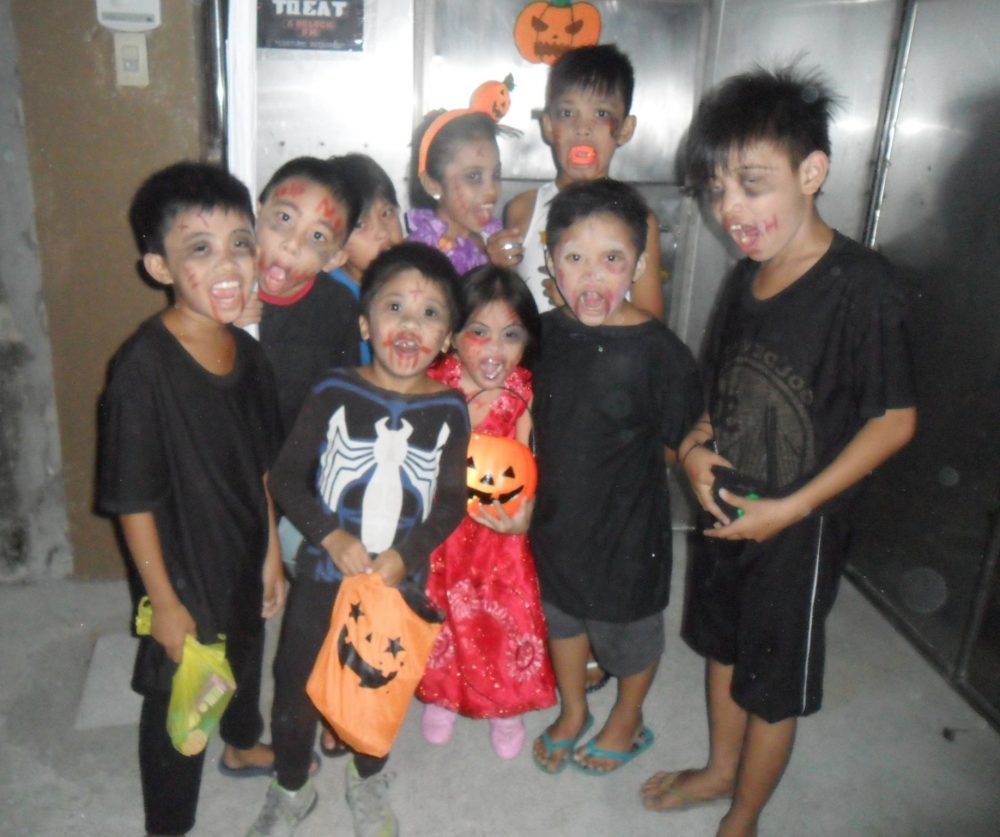 Halloween in the Philippines takes a different twist. As a recent adaptation from the western culture, the Filipinos, specifically kids, apply their own version of trick-or-treating. The great disparate between kids in Canada and those in the Philippines lies on the extent of behavior, demeanor and venue in which trick-or-treating is conducted. When I left the country in 1988, there was not a single kid wearing scary costume prowling the streets trick-or-treating for candies or anything of value. And value is one driver that propels young Filipinos to disguise and hunt for treats, cash preferred than kind. In Canada or the USA, households do not dole out money at all. Their version is totally premised on wholesome fun, funny and spooky tricks, mitigated pranks, overblown pompous costumes and lavish decorations. 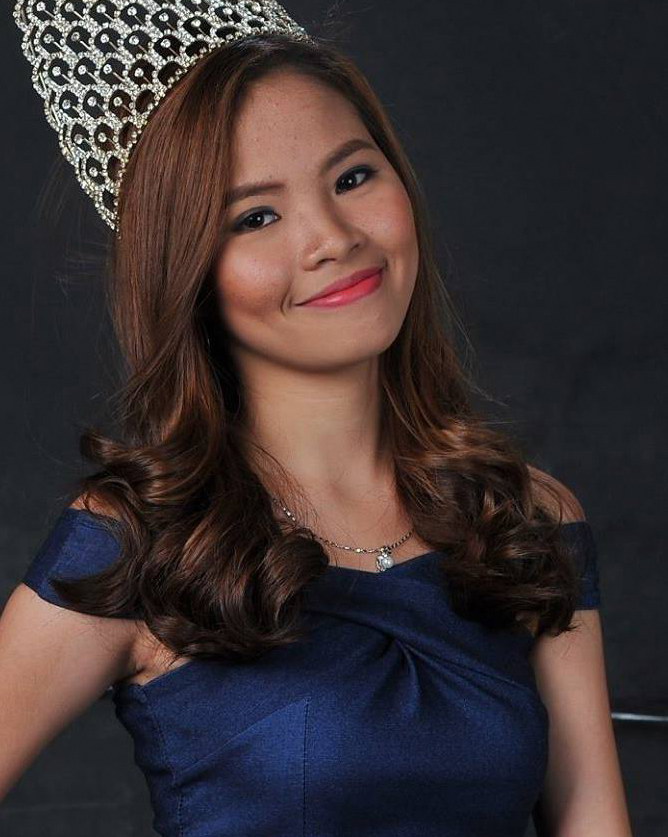 Mariah Kyle Garsula recaps her perspective of Halloween in Manila, “Celebration of Halloween season here in the Philippines is different from other countries. Although we can see a lot of influences from the western cultures such as pumpkins, kids trick-or-treating, and Halloween parties with people wearing scary costumes. This is also the season where all scary stories are being revisited and featured on TV or in the cinemas. But in almost all parts of the country Filipinos focus more on a traditional aspect of the celebration where family bond together to commemorate the loss of their loved ones which is also called ‘Undas’. Part of Undas preparation is cleaning and repainting of graves where lost loved ones are entombed. And most importantly after that, families spend their day together in the cemetery offering flowers, candles, prayers and spend time remembering their lost loved ones. Some people raise the level of celebration with loud music, videoke singing, games/cards while feasting on homemade native delicacies.” 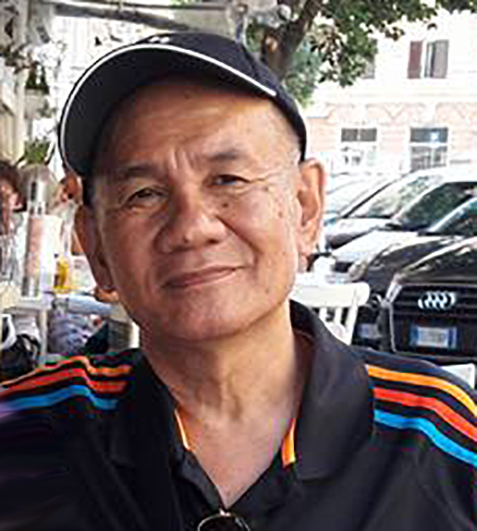 On another perspective, Nonong Razon of Makati provides his personal account on Halloween, “In general, I consider Halloween a non-event here. Sure, department stores sell Halloween items but in our neighborhood for example, wala lang (non-factor). You go to the gasoline station, street kids knock at your window saying trick or treat expecting you to give them coins, and they’re doing this while motorists are waiting for the green light. Some upper-class subdivisions would most probably celebrate it, likewise hotels, but by and large, Halloween is just a name for most.”

Two interesting perspectives on Halloween. Overall they paint a picture devoid of religious overtones, as were the case in Canada. Halloween in the Philippines, however, showed a stark reality of desire for materialistic gains perpetuated by young kids whose families economically border the subsistence line. Young kids are privy to the hardship in the family where at such young age Mikay would rather receive money than candies to appease her desire for material things that are not easily provided by her parents. Appreciating the value of money is definitely a good thing but not at the circumstance presented in the case of Mikay. Kids of her age should not worry about money. They should go trick-or-treating on Halloween for the sake of having fun and go home happy with their minds set on consuming their Halloween treats.

The All Saints Day celebration in the Philippines, on the other hand, remains a time-honored event that showed generation after generation of sustained respect and reverence for the dead. The details may slightly vary from one region to another but overall the religious implication and regard for the departed loved ones are exhibited in every scenario in the cemetery on the first day of November. Just as “undas” is entrenched as one of the perennial and most celebrated feasts in the Philippines, it is not the case in Canada and may even be non-existent in comparison. While Filipinos in Canada continue to pay respect and reverence for their loved ones who have departed, it is in no way comparable in magnitude to Philippine’s version of “undas”.

In 2012, I drove my tiny Tiburon from Florida to Galveston, Texas, stayed there for a week by myself and drove back to Florida. Why I did that was a long story.  It was possibly the longest time I’ve spent all alone here in America or elsewhere. I’ve spent over 36 hours on the road […]

All these years, I never really appreciated Father’s Day for the simple reason that I thought it didn’t apply to me for the longest time until about nine months ago when I finally had a son myself.  I never thought of the folly of it until I came about a quotation from Clarence Kelland that says, […]