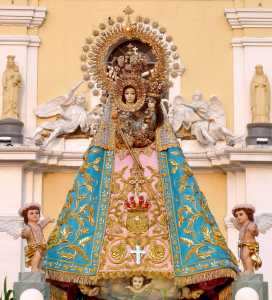 Manila, Philippines, October 11, 2017. FSDPI (Filii Sancti Dominici Philippinensis Inc.) in May 2017, launched its first pilgrimage project to the Basilica of Our Lady of Manaoag where the image of Blessed Virgin Mary as Queen of the Most Holy Rosary is enshrined. The project is managed by the FSDPI committee on Apostolate with the full support of its president, fray Anju Castigador, and Filii co-founder, fray Mike Plana.  The objective of the pilgrimage is to revitalize the rosary devotion to the Blessed Virgin Mary. The pilgrimage is also a means to support the ministry of the Dominican Order to the faithful. The project was conceptualized as an FSDPI apostolate with secondary intention of sourcing benefits to sustain the pilgrimage as well as the religious activities and mission of the organization.

“Our viewpoint of the pilgrimage emanates from our common desire of spreading the devotion to the Blessed Virgin Mary,” explained Fr. Boggs Mara, OP, a staunch supporter of the project, “The praying of the Holy Rosary will hopefully usher millennials in devotion to Our Lady of Manaoag through the program initiated by both the Dominican Order of Preachers and the Filii.”

The pilgrimage project is supported with a brochure which contains and explains the objective of the pilgrimage, the brief history of the shrine of Our Lady of Manaoag, and a brief background of the Dominican Order and FSDPI. Flyers about the project were distributed during the pilgrimage trip, which include instruction on how to pray the twenty mysteries of the Rosary. “Through this initiative, the Filii sponsored pilgrimage is assured to spread the love and devotion to the Blessed Virgin Mary by praying the Rosary” said Fray Yoyong Dalde, the project leader and promoter.

During the project’s initial planning, where details and objectives of the pilgrimage were discussed, all members present had positive inputs with zero objection. The pilgrimage launched its maiden trip on May 21, 2017, busing 35 pilgrims. Fray Jimmy Cura, a respected member and adviser of Filii, and his family, were among the first pilgrims who took the trip. Fray Jayno Jabonillo, one of the members of the pilgrimage committee was also present in the first trip, who acted as the spiritual guide.  Fray Jayno’s role was to lead the praying of the Holy Rosary aboard the bus, after giving travel and safety reminders. Like any other beginning, something must pass the birth pangs and the Filii apostolate was not exempted. Important learnings and key takeaways were taken into consideration to ensure the success of subsequent trips. 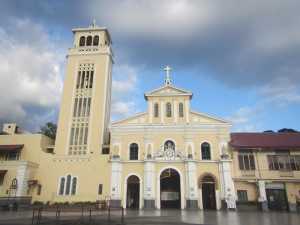 The second pilgrimage to the basilica of Manaoag was on May 27, 2017 where 32 pilgrims were accommodated. Like the first journey, similar information was introduced with the new inclusion of a video presentation which showed the history of the Shrine of Our Lady of Manaoag. A question and answer trivia contest was also played aboard the bus to keep the pilgrims entertained, where at stake was a blessed new rosary as a prize to the lucky winner. The third pilgrimage trip to the shrine of Our Lady of Manaoag was after the summer school break on June 25, 2017 with a scaled down participation of 13 pilgrims.

The Manaoag pilgrimage could be traced back to the time when news spread of the Virgin Mary’s first apparition in the sleepy town in 1610. Through the centuries, a series of miracles have been witnessed and documented, fortifying the town of Manaoag as the Shrine of the Miraculous Virgin Mary with the Lady of the Rosary as its patron. On February 17, 2015, Pope Francis officially declared Manaoag Shrine as a minor basilica, making it the 1,678th such basilica in the Christian world.

For centuries, Catholic believers came to Manaoag in droves to pray, offer their adoration and express their sincerest devotion to the miraculous Virgin. Devotees recite the Holy Rosary either quietly alone or audibly in harmony within the community followed by novena to the Blessed Virgin.

FSDPI, with headquarters in Quezon City, Philippines, also affectionately called “Filii”, translates as: “the sons of Saint Dominic in the Philippines”. It is an organization of men, brothers in faith, who have undergone and received formal religious training in the Dominican life and Spirituality under the Dominican Province of the Philippines.

A pilgrimage is a spiritual journey to holy or sacred places, such as shrines and other locations that bear importance to the person’s belief or faith. It is an expression of devotion, connecting deeply to the rich history of a place, thus achieving a specific spiritual benefit.

An apostolate by etymology is derived from the latin apostulus or Greek apostolatos which means apostle or messenger. Basing from its Greek origins, apostolate could be understood as being sent forth.

Lerio Dalde
"Fray Yoyong" entered the Dominican seminary in 1976 and graduated with the degree of Bachelor of Arts in Philosophy. He later joined the Augustinian Order where he got his Theology degree. He is a holder of two Master of Arts degrees, one in Psychology (UST) and another in Education (UE). He likewise graduated Bachelor of Laws in UE, his third undergraduate degree. He has a Ph.D. in Philosophy for Children from Montclair State College, now Montclair State University. He has authored and co-authored various books in Logic, English, Ethics, and Philosophy. Among his roles were as a high school principal, College Dean, and pioneering director of the University of Perpetual Help, DALTA System in Calamba, Laguna. He is the founder and president of SAISAT College (Institute of Science, Arts, and Technology, serving as a consultant of the Commission on Higher Education and an assessor of ISO Global on basic and tertiary education.

St. Dominic, Light of the Church

O Light of the Church, Doctor of Truth, Rose of Patience, Ivory of Chastity. You freely poured forth the waters of wisdom. Preacher of grace, unite us with the blessed. –“Lumen Ecclesiae” (from the Dominican Book of Prayers) Early Life Domingo de Guzmán was born at Caleruega in Castile of Spain, possibly a year or […]

Attending night prayers at the seminary almost always meant hearing that ancient but rather beautiful melody of “Day is done“. Many years later even as we close this maiden issue, I hear similar thought-provoking lyrics, albeit, this time on a more worldly tune. Most would tag Barry Manilow ancient though, considering he started way back […]

Welcome to the December Edition of Epistoliorum! Learn from the business success of our Fray in Focus, Eugenio Michael Plana who has used as his life guides the charisms of The Dominicans and attained spectacular success in various businesses he embarked on. Outwit hackers by learning from Fray Joel Gabriel how to make and maintain […]