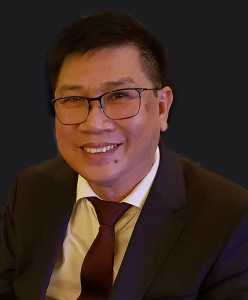 Coming from a small town of Zarraga, Iloilo in the Philippines, and born from a simple Ilonggo family, I cannot fully appreciate when friends introduce me to others as “Mike, my friend, the businessman.” Nothing in my curriculum vitae,  either in academics or in ancestry, suggested I would become a businessman.

My wife and I are in the contract manufacturing business of natural and cosmetic products for local and multinational companies. With our group of companies,  we employ nearly 700 people.  We are also in the pharmaceutical business, specializing in cardio-maintenance drugs. Our other company is in the distribution of special fine cosmetic raw materials from Europe. We also have a company that distributes fragrances and scents for commercial and industrial requirements.

My first love and passion however, is farming. In the province, I am a farmer producing rice, fruits and sugarcane.  I also ventured into aqua culture. This is understandable as I came from a family of farmers. My childhood was spent mostly as a sacristan of our Parish. And when I learned to play guitar from my older brother, I became the “guitarista” (guitarist) of our Church.

On my first year of high school, I entered the Seminario Minor-Recoletos in San Carlos City, Negros Occidental. There, we were introduced to Ars Latina, and I fell in love with the musical conjugation of Latin words –  “amo, amas, amat,” and equally loved  the Solfeggio class of our lovely music teacher. After several boxing bouts committed while the Fathers were deep in their afternoon siesta,  and after repetitive comic and embarrassing infractions, it was clearly a done conclusion: I wasn’t ready for seminary formation.

I love books and have been seriously influenced by them. I was a senior in high school when I was fascinated with and literally hooked on reading. Amongst which that influenced me was the book on the Lives of the Saints. There is so much nobility, spirituality and chivalry in their lives: the soldier turned saint, St. Ignatius of Loyola,  St. Martin de Porres – known for his indomitable spirit of humility, and St. Dominic de Guzman, the “Domini Canis,” (Dog of the Lord), for in  a dream,  his mother Beata Juana de Aza saw a dog carrying torch in his mouth and set the earth on fire.

I entered the Dominican Postulancy House in Manaoag, Pangasinan with more than forty other teens mostly from the Bicol and Visayas region. At  the Postulancy, we learned to obey the rules and for many of us hush hush, learned to break it, too.  Dominican life was introduced to us and we learned to accept each like brothers. The strong brotherhood can be traced back to our Postulancy days. Sixteen of us donned the Dominican habit as Novices in the former Lizares Mansion in Jaro, Iloilo City. Six were ordained priests – four as Dominicans and two as Diocesan. Two were “martyred” –  Fr. Ignacio ”Ace” Serrame of the Diocese of Pangasinan and Fr. Romeo ”Momoy” Asuzano O.P.,  whose death, paved the way for the establishment of FSDPI or the “Filii” in 2006.

It did not work out for me for a second time; mea culpa. There were just too many reasons in form and substance that finally I said, “Many are called and I was not chosen.” An instant problem an ex-seminarian faces is how to adjust to a new life minus the Matins, Lauds, and Vespers. I personally missed the white “abito,” “capucha” and the  rosary belt. For all the Bosses, Armanis and Pradas, they are nothing compared to the white cloth that we missed and loved.

Another is the perception that one is out into the world because he miserably failed the daily quiz. Most ex-sems including me, devoured every opportunity to excel in anything available to grab at. I remember becoming the President of the Student Council, Captain of the Debating Team, College varsity in football, chess and Track and Field, Literary Editor of the College paper, President “ng pinakasiga na Fraternity sa University campus” (of the toughest Fraternity in the University campus), Chairman of a national youth organization,  and yes “may syota na maganda”, “seksi” and “sobrang talino” – ( and yes, with a beautiful, sexy and very intelligent girlfriend.)   For the many not-so-right reasons, we just wanted to say, “espesyal kami, galing kami ng seminaryo.”  ( We are special;  we came from the seminary).

Through the years,  my experience in the Dominican life, has helped me chart my personal and professional direction. As a businessman, I chose to be guided by the principles and tenets of the Dominican charisms of “Veritas” and “Contemplare et contemplata aliis tradere.”  In business, I uphold these 2 charisms as my life guides  – Truth and honesty in business dealings.  The core value of “Contemplata Aliis Tradere” or sharing to others what has been contemplated, forms part of our corporate mission.

The establishment of Filii Sancti Dominici has started to evolve to something more than just an organization of friends and recollection of memories. To me and many of us,  it has become a home –  our own “ex clausura.” We continue to honor and be grateful for the past,  while looking forward to, and finding more inspirations for the future.

Wishing you all a Very Merry Christmas and A Happy New Year!

Eugenio Michael Plana
"Fray Mike" upon graduating from Sacred Heart Academy, Zarraga, Iloilo, entered the Dominican Postulancy in Manaoag, Pangasinan in 1976. He then joined his batch at the Dominican Novitiate in Villa Lizares, Jaro, Iloilo City. Outside the seminary, he majored in A.B. Political Science at the University of San Agustin, Iloilo City. He worked as Special Assistant to the then Minister of Budget. Married to Jessica, they have four kids: Miguel Augusto, now a budding businessman, twin sons Michael Augustine and Michael Dominic, both university students at the Ateneo de Manila, and Regina Jessica, attending Miriam College Grade School. Mike’s special attachment to nature made him an agri-aqua farmer in Negros. He and his wife built a manufacturing business in natural care and cosmetics industry based in Quezon City. Fray Mike is also in pharmaceuticals and international trading, as well as in distribution of chemical ingredients which include partnerships with principals from Europe, Philippines and Asean markets. His family serve in the Lectors Ministry of Santa Maria Della Strada parish in Quezon City. Fray Mike is also the chair of the Parish Ubas (Anti Drug) Committee. With track record in agri-business, he is also active in supporting the farmers group and upholding their cause as NGO. In 2006, Mike co-founded FSDPI. To date, the Filii organization boasts over 300 members, with provincial chapters in Iloilo, Bicol, Davao, Cebu, and Northern Luzon in Philippines, and North America secretariats based in Houston, Texas and Toronto, Canada.

Catherine of Siena and the Covid-19 Pandemic Some thinkers like Slavoj Zizek, in his most recent book, aptly entitled the Pandemic! COVID 19 Shakes The World, compared our present lot to a post-apocalyptic scenario in a doomsday movie. However, some of us are not fortunate enough to be just mere watchers, some of us are […]

Saint Dominic and my calling to the Diaconate

There was one novitiate lecture that stayed in my reverie through the years.  We were – to use a more secular term – ‘marooned ‘ in the Dominican Novitiate of the Annunciation (the DNA as we fondly called it which, looking back, is the right biological term when you are forming a group of individuals […]