Who do you think you kid?

Are you really a photographer like you said your are?  Well, I can easily find out if you are just disguising as one behind that expensive DSLR you hang around your neck.  Let me see how you hold your camera.   There you go.  (See answer at the bottom of this article).

If you are a DSLR user or intend to be one, and photography is your passion beyond just a hobby, you should marry yourself to your camera.  Simply put, like marriage, except the one that was performed under a shotgun duress, you must know the person you’re marrying very well and in camera’s case, the analogy is fitting.  A DSLR has features, depending on the kind and complexity of functions it has, that would take you more than a day to familiarize.  It could be a daunting task to know everything about your camera at the beginning and there is no shortcut to familiarizing yourself with your camera’s many capabilities.  In a marriage relationship, your marital success hinges on how well you know your partner, understanding what ticks her/him on and off.  Even more so in camera.  Your success in capturing good shots really depends on how well you know your camera, what it can do under many varying situations and circumstances.

Here’s a few pre-shoot must-dos that every DSLR user should know.  Always conduct a WISA protocol before you push that shutter down.  And the acronym is not hard to remember:

ISO is a measure of how sensitive the sensor of your camera is to light.  The term originated in film photography, where a film of different sensitivities could be used depending on the shooting conditions, and it is no different in digital photography. The ISO sensitivity is represented numerically from ISO 100 (low sensitivity) up to ISO 51,000 (high sensitivity) and beyond, depending on your camera, and controls the amount of light required by the sensor to achieve a given exposure. At ‘low’ sensitivities, more light is required to achieve a given exposure compared to high sensitivities where less light is required to achieve the same exposure.  To understand this, let’s look at the following situation.

Low ISO numbers
If shooting outside, on a bright sunny day there is a lot of available light that will hit the sensor during an exposure, meaning that the sensor does not need to be very sensitive in order to achieve a correct exposure.  Therefore, you could use a low ISO number, such as ISO 100 or 200.  This will give you images of the highest quality, with very little grain (or noise). 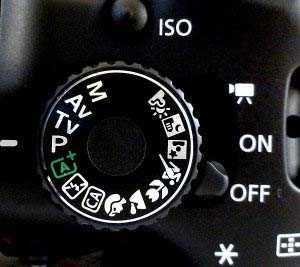 Shooting modes should the first ones you should get to know better.  The shooting modes will most likely be found on a dial labeled with ‘auto, Av, Tv, P, M’ and maybe more.  Selecting a shooting mode will determine how your camera behaves when you press the shutter, for example, when ‘auto’ is selected, the camera will determine everything to do with the exposure, including the aperture and shutter speed.  The other modes, ‘Av, Tv, P, M’, are there to give you control.

Don’t worry if your camera’s mode dial looks a little different.  Different manufacturers use different abbreviations for the shooting modes.  Your mode dial may have the letters A, S, P, M (instead of Av, Tv, P, M), yet they all function in the same way.  Here’s what the letters stand for. 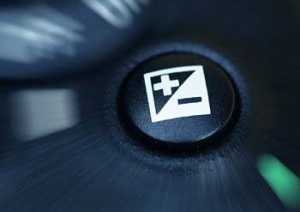 Generally found on a small +/- button near the shutter, this is one of the most useful functions to learn how to use.  It allows you to either increase or decrease the cameras default meter reading to account for the actual brightness of a scene.

If a scene contains primarily bright tones and is being rendered too dark, for example, a bright white snow scene (that will typically be reduced to 18% grey by the default metering system), you can apply positive exposure compensation to let the camera know that the scene should be lighter than middle grey.

A good photographer is well prepared.  Before he goes on a photo gig, he creates a list of things that he can imagine he would need in all conceivable situations.  For example, if you are going to cover a concert performance, you should envision what the venue is gonna be like, the possible lighting condition, the no-flash regulation, where you gonna be positioning yourself relative to the stage, how far will you be from your subjects.  Better yet, if you can visit the venue days before the actual performance is staged it will definitely eradicate a lot of guesswork.

Here’s some situational examples that might help you in dealing with the unknown.  These are purely recommendations.  You may achieve a better result by experimenting or trial and error so feel free to do so.

Here’s how you should hold your camera like most pros do.

A “Sweet” Trip To Austria

“Making Life A Little Sweeter”…does say our company’s slogan printed on almost all of our flyers, website, marketing brochures, product catalogues and even at the back of our business cards. Since April 4, 2011, I’ve been working as corporate’s Supplier Quality Engineer, for Florida Crystals Corporation and later formed as ASR-Group Inc. in 2013.  The […]

Boracay – “The Best Island In The World”

This year, Conde Nast Traveler’s readers picked Boracay in the Philippines as the “best island in the world,’ outside of the U.S.  Their choice includes Cebu and Palawan as the next two best islands in the world!  The Philippines is indeed the “Pearl of the Orient.” Last summer, we spent our family vacation in Boracay. […]