Editors’ note: Fray Jimmy has served the Rotary as Past Governor for Rotary International District 3830 and Past President of Rotary Club of Rizal West in the National Capital Region, Philippines

One of the things I am often asked about is my involvement in Rotary. Why am I seen and heard doing Rotary work in so many places? How do I find the time and the energy? Why do I continue being involved after so many years?

As a former Dominican, I can say that Rotary turned out to be a God-sent in helping pave the way for a smooth and enjoyable re-entry into the secular world. The sense of altruism that is an offshoot of our Dominican formation found an outlet in Rotary. So too, the habit of preaching the good news. And the sense of community. And the value of serving above self.

I can truly say that, of all the organizations with which I have been involved since I left the Order, Rotary has been among the very best for my continual development. It has been the most helpful and the most enjoyable. Not only for me personally, but also for my family.

So, to answer the above questions, let me invite you to take a closer glimpse of Rotary. When you have known it a little better, I know you will agree with me that Rotary was one of the best things that ever happened to me.

A Brief on Rotary International and Rotary in the Philippines

Rotary International is one of the largest civic organizations in the world. It was founded in the United States in 1905 primarily to promote and foster the Ideal of Service as a basis of fellowship among professionals and business leaders who volunteer to render humanitarian service to the community. It has a membership of 1.2 million professionals, business leaders, and community leaders that belong to some 35,000 Rotary clubs, which, in turn, are administered through 540 Rotary districts located in 200 countries and territories around the world. 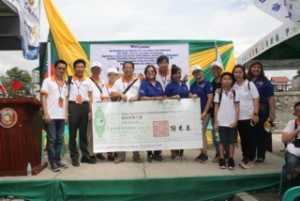 Rotary first arrived in the Philippines in February, 1919, through the Rotary Club of Manila, the first of its kind in all of Asia. All in all, there are now more than 800 Rotary clubs in the Philippines with a cumulative membership of about 25,000 Rotarians. These clubs are clustered and supervised through 10 Rotary International districts, each one of which is headed by a district governor. Philippine Rotary is considered one of the strongest and most active in the world. Membership in Rotary is by invitation only and is extended to individuals with strong leadership potential irrespective of gender.

It’s been 37 years since I first became a charter member and vice-president of the Rotary Club of Rizal West. This club was established in March, 1980, to render humanitarian service principally in the municipalities of Taguig and Pateros, at the time considered to be the two poorest towns in all of Metropolitan Manila.

RC Rizal West is now one of more than 90 Rotary clubs that comprise Rotary International District 3830, and count more than 3,000 members cumulatively. These clubs render volunteer work in the cities of Makati, Taguig, Paranaque, Las Pinas, and Muntinlupa, the town of Pateros, and the entire province of Palawan.

The Basics of Rotary 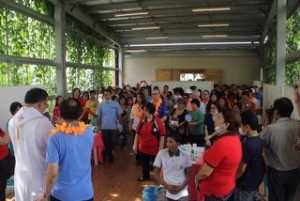 Membership in Rotary is a great opportunity for fellowship with one’s peers in the professions, business, or community leadership. It provides a wonderful vehicle for normally busy people to do volunteer work that helps transform communities into healthy, peaceful, and happy ones. Since members do not apply but are invited only, chances are that one’s fellow members in a Rotary club are usually leaders in their own right in their respective professions, businesses, or communities. Rotary brings these people together through weekly meetings and timely gatherings and publications that keep them engaged in voluntary work despite their busy work schedules.

The Object (or Purpose) of Rotary is to encourage and foster the Ideal of Service as a basis of worthy enterprise and, in particular, to encourage and foster: first, the development of acquaintance (or fellowship) as an opportunity to serve; second, high ethical standards in business and the professions and the recognition of the worthiness of all useful occupations by which service is rendered; third, the application of the Ideal of Service in one’s personal, business, and community life; and fourth, the promotion of international understanding and goodwill through a worldwide fellowship of professional and business leaders united in the Ideal of Service.

Rotarians are guided by a Code of Conduct, which is more popularly known as the Four-Way Test. Briefly, it is a daily reminder of proper conduct by asking one’s self a set of questions, as follows: “Of all the things that we think, say, and do: First, is it the Truth? Second, is it Fair to All Concerned? Third, Will it build Goodwill and Better Friendship? And Fourth, Will it be Beneficial to All Concerned?” The ideal conduct is one that elicits a yes to each question.

In the run-up to Rotary’s 100th anniversary in 2005, a worldwide survey was undertaken to check what types of projects were typically undertaken by the more than 30,000 Rotary clubs in the world.

The survey indicated that typical Rotary projects can be clustered into Six Areas of Focus. These are: (1) Clean Water and Sanitation, (2) Maternal and Child Care, (3) Disease Prevention and Treatment, (4) Basic Literacy and Education, (5) Livelihood and Economic Development, and (6) Peace and Conflict Resolution. 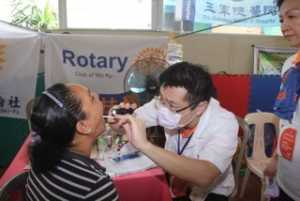 In other words, the application of Rotary’s Ideal of Service has focused on the most basic needs of human communities around the world. It is the urgency of these needs that has given the impetus to the spirit of charity and gift-giving and volunteerism that characterizes many Rotary clubs.

It is this same spirit that has made The Rotary Foundation (TRF) – the fund-raising arm of Rotary International – one of the consistently top-ranked charities and best-managed private financing institutions in the world. TRF counts the likes of Bill and Melissa Gates and Warren Buffet among its consistent global donors that support Rotary’s End Polio Now campaign and other projects aimed at the alleviation of poverty, hunger, and disease in the poorer countries of the world.

Some Projects of the Rotary Club of Rizal West

Closer to home, TRF helped our Rotary Club of Rizal West carry out and sustain several flagship projects. These include:

Through the internationality of Rotary, our RC Rizal West has made friends with other Rotarians from clubs in other parts of the world. The Rotary Club of Singapore, for example, has been our steadfast partner of close to three decades in many of our projects, with assistance coming from clubs in Malaysia, India, Australia, South Korea, and Taiwan.

I can also say with certainty that my Dominican formation in preaching has been most instrumental in the assignments I have most often been asked to take on in my Rotary club, in our district, the various districts around the Philippines, and sometimes in other countries. These assignments have to do with lecturing, giving inspirational speeches, facilitating training sessions, writing articles, and the like.

Indeed, Contemplata Aliis Tradere finds much realization in the work of Rotary. No wonder, one of my favorite Rotary mentors ever, the late ophthalmologist, civic leader, and proud Thomasian, past Rotary International Director, Dr. Sabino “Benny” Santos of Malolos, Bulacan, used to say with such spontaneity and conviction that being a good Rotarian was his sure ticket to heaven.

“The Rotary motto of Service Above Self,” Benny Santos often said, “is not only a constant reminder of the Lord’s commandment for us to love our neighbor as ourselves, but a challenge for us to do even better than that. If we keep this in mind and practice it daily, you cannot go any other way but straight to heaven.”

I am including in this article some photos of a Rotary activity that my club undertook with several other Rotary clubs on November 25, 2017 in Paranaque. It is a reprise of our Eyes That Care project for members of a new community that Rotary District 3830 literally built from wasteland.

The community is called Rotary Homes or PAR (for Paranaque Rotary Homes). New houses were built for informal settlers, or squatters, who lived in shanties along the banks of the Paranaque River. When a strong typhoon struck, the river overflowed and washed away all the shanties. People died and all they owned were taken away.

Instead of merely giving relief goods, various Rotary clubs in our district decided to pool their resources together. They proposed to relocate all the squatter families to safer grounds on a property owned by the city government. Henceforth, no more families will be allowed to put up dwellings on the banks of the river, so that it can be properly dredged and cleaned up.

In partnership with the city, close to 150 homes have now been built, with another 150 set to be completed by early next year. All told, 1,000 homes are targeted to be built. In the meantime, a multipurpose hall has also been constructed, plus a new library-cum-day-care facility and project office. All the funds are coming from donations of Rotarians through the Rotary Homes Development Foundation, Inc., which was established to take care of this project.

Rotary clubs from South Korea and Taiwan have pitched in and are donating funds for the construction of many of the homes, complete with essential furnishings. 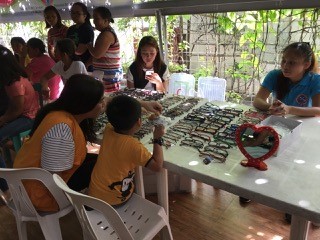 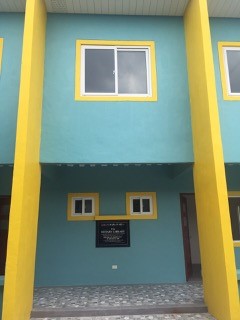 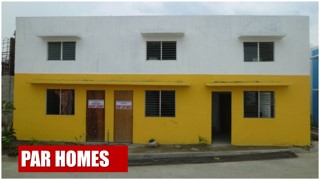 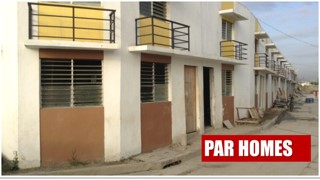 Jaime A. Cura
"Fray Jimmy" is a schooled educator, professional manager, and public communicator. He has served at the helm of various government institutions and private corporations. A former national president of the influential Chamber of Real Estate and Builders’ Associations, Inc. and the ASEAN Association for Planning and Housing, he is currently vice-chairman of the RGV Group of Companies and consultant to various real estate development companies. He has also served as trustee and vice-president of the Tourism Congress of the Philippines. Jimmy is also an active Rotarian of 38 years. He served as president of the Rotary Club of Rizal West in 1984-85 and, later, as Governor of Rotary International District 3830 in 2005-06. He is a Paul Harris Fellow and multiple donor of The Rotary Foundation. Jimmy is a frequent speaker and resource person in meetings, conferences, and seminars in or outside the Philippines. He has written many articles on Rotary topics and contemporary concerns. Jimmy has been married to Luz V. Cura for more than 40 years. They are blessed with three children – PJ, James, and Claudine. PJ is married to Frency Lacsamana, but still childless. James remains single. Claudine is married to Matthew Guerrero, by whom she has a son named Manolo Jaime Cura Guerrero, or Manu, for short.

Letter On The Sand

Dear Rene, We surely miss you this summer.  We miss the lovely concertos that you alone among us could play on the piano.  Here at BALULAN we have instead the murmur of the surf, the off-key tune of the birds, the rhapsody of coconut leaves… Your absence, Rene, spells for us a world of awakenings.  […]

Coming from a small town of Zarraga, Iloilo in the Philippines, and born from a simple Ilonggo family, I cannot fully appreciate when friends introduce me to others as “Mike, my friend, the businessman.” Nothing in my curriculum vitae,  either in academics or in ancestry, suggested I would become a businessman. My wife and I […]