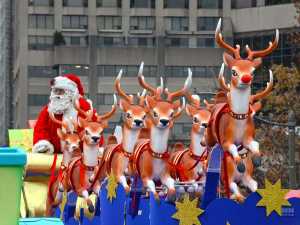 At the intersection of King and Bay Streets, a big yellow school bus full of kids stopped to unload its passengers.  Right behind the bus, motorists in private cars and Uber cab passengers grew impatiently weary as kids take their time leisurely from getting off the bus, oblivious to the traffic urgency they created.  School buses are king of the road, second only to firetrucks and ambulances.  When the school bus swings open its “stop” sign by the passing side, everyone, including the police and streetcars stop (streetcars are energy friendly means of public transportation around downtown Toronto running on the rail track and powered by overhead electric cable).  There is no exception, unless the sirens emanating from either a firetruck or ambulance indicating a life-altering situation is closing in behind, in which case it can proceed urgently counter-flowing the opposing traffic in order to get by the school bus. 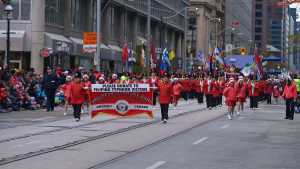 On a regular Sunday afternoon, major thoroughfares around the downtown Toronto would have been free-flowing despite the high volume of motorists which is pretty normal.  On a Sunday of November 19th, some major roads have been closed, traffic re-routed causing a commotion among motorists who are caught ill-advised of the traffic flow.  Public parking alongside the streets are temporarily prohibited.  Designated parking areas blocks away from the center of the downtown area are full to capacity.  It didn’t matter that they charge exorbitant fees, $40 at the least, depending on how close its location is relative to the center of the event.

Public transports like subway trains, Go trains and TTC buses are the smartest option if you plan to go downtown.  Uber, Grab and regular taxis are all busy.  You will have to wait 45 minutes to an hour to get a ride.  Driving your own car, however, is inevitable especially if you live in the outlying areas where public transports are not the best alternative.  Regardless of how you get there, everyone must exercise patience and endure the pains of getting around the downtown Toronto, especially on a Sunday where Santa and many of his cohorts and minions, in the form of elves and reindeers, and even angels riding on Pegasus are the main spectacles attracting thousands of onlookers.  It may be chaotic to some degree but the atmosphere is no doubt festive, joyous and celebratory.  It is Sunday, November 19th and it is Toronto’s Santa’s parade day. 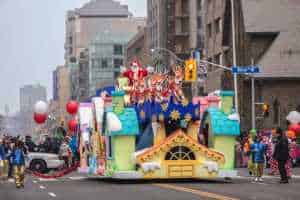 At around 12:00 noon, Yonge Street sidewalks are almost crowded to the maximum.  People coming from various subway stations continue to spill out to the street.  A family of four picked the corner of King and Yonge.  They managed to grab a premium viewing spot, where the dad secured it by blocking others from coming in, erected two folding chairs for their kids and parked his two-wheeled chest on the sidewalk behind the chairs.  Their two kids take the chairs, his wife and he will eventually use the chest to sit on whenever they get tired of standing.  The dad was confident that he brought enough food provision for the whole family that would last through the entire event.  His chest contained mostly of kid’s food, hot chocolate in thermos, bottled water and juices, and a variety of snacks.  Another family of three who walked 3 blocks away from where they parked their van assumed the next open spot and established their viewing position before others could beat them to it.  Soon the whole strip of Yong Street is filled with onlookers, kids in scarves outnumbering adults wave their hands in red and green mitts, their heads covered with brightly colored bonnets, hats or baseball caps, while adults wrapped their tops with major sports-team-branded tuques, more maple leafs logos than raptors, protecting their bald heads from the biting cold of a late November weather. 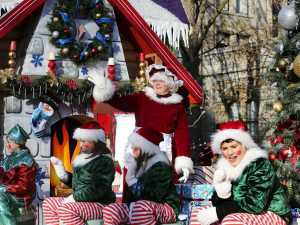 This scenario has been the day’s spectacle down Toronto’s Yonge Street every year when Santa’s parade is held.  Members of the committee that organized the event consistently picked this time of the year to hold the parade.  Strategically they believe that holding the parade on later dates would cause more headaches and may be ill-timed weather wise.  Young kids would definitely not enjoy watching Santa go by riding in his golden sleigh full of gifts if the parade is held in December when the weather on average would dip to an inclement temperature of below zero.  It wouldn’t be wise either if the parade is held close to Christmas day and boxing day when everybody gets extremely busy with the season’s shopping errands and bargain hunting after Christmas day. November is indeed the perfect timing.  Holding it later would be disastrous and anti-climactic. 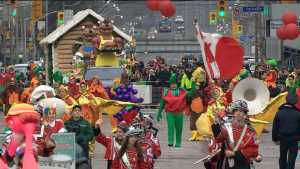 Santa Claus Parade in Toronto is a tradition of more than 100 years.  It has come a long way since it began in 1905 when Santa Claus first walked down the streets from the Union Station to the Eaton Center, one of the high-end shopping malls in Toronto.  Aside from the big guy Santa, the parade includes over 25 colorfully-themed floats, marching bands, approximately 200 celebrity clowns and more than 1,500 volunteers.  This year’s parade started at the Christie Pits Park at 12:30 pm.  It traverses past the Royal Ontario Museum, the Eaton Centre and eventually ends at St. Lawrence Market. 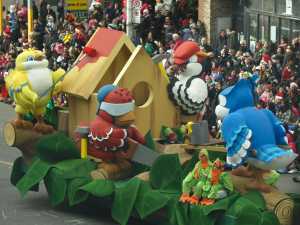 Most onlookers know what to pack and where to park.  Most of them are perennial parade watchers and anticipated the hustle and bustle of the big city streets.  Depending on where you are relative to the route of the parade, you may be waiting for over two hours before the core spectacles will come your way.  But from any vantage points, you will be able to see the parade in all its glory, as long as you arrive early and secure your spot ahead of everybody.  Those who are physically encumbered to get to the downtown Toronto, major TV networks will carry and air the spectacle in the early evening broadcast. 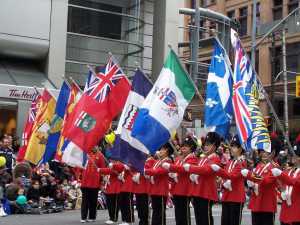 For both kids and adults, watching the parade firsthand is an experience worth the trip, regardless of where you come from and how you get to the venue.  More than the attraction, the frills, the clowns, the big band sound and the overwhelming festive atmosphere, Santa’s parade carries a profound message than meets the eye.  For Christians, the parade augurs the celebration of the nativity of Jesus, the time when Christians prepare themselves spiritually for the second coming of their Creator, Jesus Christ.  For parents who painstakingly take their kids to the event, Santa’s parade brought them to the venue where family bond and spend time together and enjoy the fun.  Santa’s parade pre-disposes kids to another exciting season event in their lives —  Christmas season.

The Corona Virus Disease 2019 (COVID-19) pandemic has wrought sweeping, horrible havoc all over the globe. No nation on the face of the earth remains unscathed by it physically, socially, economically, religiously, and, if I may add, spiritually. Nobody stays free from the hardship, fear, and uncertainty which the flagrant virus brings in its wake. […]

There are many catchwords that this pandemic has given birth to, which in turn describes our present lot. Some of the words are quarantine, lockdown and new normal. However, I would like to propose another word: re-imagination. This is not in any way longing for a future utopia after this pandemic passes, but a sort […]