Intramuros at the time of the Spanish Colonial period was synonymous to the City of Manila.  Other towns and suburbs beyond the city walls were referred to as “extramuros” or “outside the walls”.  It was both the seat of government and center of its social institutions: religion, education and economy.

In December 1941, despite the Open City declaration of the then American administrators, the Imperial Japanese Army initiated its assault on the port of Manila, the Pasig River tributaries and Intramuros.  Among the first casualties even prior to the actual invasion were the original Santo Domingo Church, the convent and the adjoining old structure that was the University of Santo Tomas.  At the end of the war, all the historic churches within the walls were completely destroyed, with the exception of San Agustin Church, though damaged was the only one left standing.

The confines of Santo Domingo Church serve as the Provincial motherhouse of the Dominicans in the Philippines.  At the time of its destruction, it was the fifth such structure built on the site with the four preceding churches destroyed by either fire or earthquake.  Being the shrine of the revered and beloved image of Nuestra Señora del Santissimo Rosario de La Naval de Manila, it was a favorite of Manila’s devout and the muse of many artists, historians and writers, chief among them being Nick Joaquin, National Artist and avid La Naval devotee. 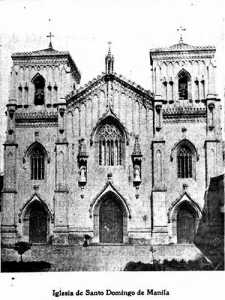 Built in the Neogothic tradition by the famous architect Felix Roxas y Arroyo, the fifth church of Santo Domingo began construction in 1864 and was completed in 1868 (Torres, 51, 2005). Its dramatic façade was the subject of many reviews precisely because of its grandeur and magnificence. Supported by two rectangular bell towers, the main façade boasted of arched, gothic windows and several niches, one of which, housed the very first wooden image of Our Lady brought by the Dominicans from Mexico in 1587 (Torres, 52, 2005). Accentuated by lancet windows and tracery, the façade achieved a distinctly Gothic aura that was also well-reflected in the church’s amazing interiors.

Inside the spacious church, one would have noticed the black-and-white tile flooring of the church and the spiraling columns of the church. The materials used for the columns were “carved from molave, acle and ipil wood. The vaults were made of zinc and galvanized iron with batikuling moldings.” (Torres, 51, 2005) The ceiling was also ribbed just like any Gothic cathedral from Europe. Ribbed ceilings, in effect, give off a webbed ceiling with intricate designs and dramatic pointed arches. Such a design gives off an impression that the entire congregation was being lifted to the heavens. The church also boasted the biggest crystal chandeliers imported from Europe among all the churches of Intramuros (ibid.).  Many of its carved wood features were done by the celebrated Isabelo Tampingco and his atelier. 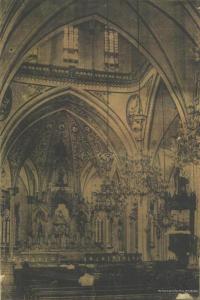 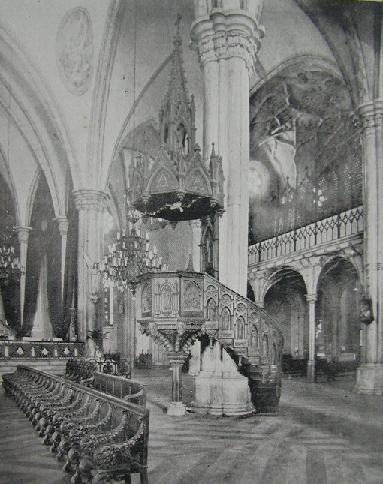 There was also the eye-catching pulpit of Sto. Domingo. A jewel on its own, it was an elongated Gothic pulpit with fine details intricately carved on its surface.  Surrounding the handrails were statues of saints carved in small panels. The pulpit was topped with a pointed canopy, which was embellished with Gothic motifs.  Patterned after the pulpit of St. Stephen’s Cathedral in Vienna, Austria, the design of the pulpit was supervised by Fray Joaquín Sabater, OP, a professor of Fine Arts from the Universidad de Sto. Tomás (ibid.)

But of course, nothing would be more impressive in any church than its main retablo. Santo Domingo’s large main altar didn’t fail to impress and vivify the congregation. The main altar featured thousands of lit candles during solemn rites and was a feast for the eyes. There were four niches inside the Gothic retablo: one in the center, one at its left, another at its right and one on top of the central niche. The saints that occupy these niches would usually be interchanged especially on their feast days. The main altar was wide but also dramatic in its slope ascending to the ceilings. Accentuated with pointed details and arches, it was definitely a gem of the church’s interiors. The retablo was said to have the most number of gold and silver ornaments among all of Intramuros’ churches (ibid.). 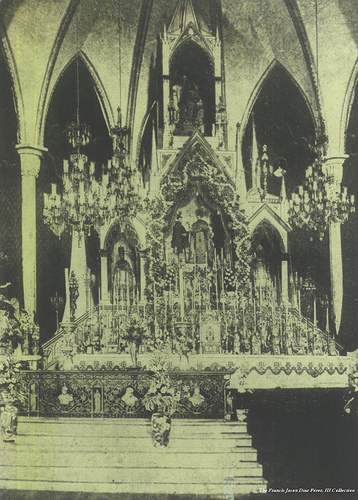 Unfortunately, Santo Domingo Church was reduced to rubble in 1941 after getting directly hit by bombs dropped by the Japanese mere days after they brought Pearl Harbor to its knees.  Luckily, the miraculous and beloved image of La Naval was spared because it had been kept in the church’s vault.

In December of 1941, the Japanese warplanes bombed Intramuros.  One of the first casualties was the Santo Domingo church and convent.  The towers were destroyed and only the walls were left.  The church and the convent burned for many days.  Wisely enough, days before the bombings, The Dominican friars had stored the centuries-old image of the ‘Santo Rosario’ and her more precious vestments in the ‘tesoro del convento’, the convent treasury, which faced Plaza Isabel II.  But because of the intensity of the fire, no one really knew if the image of the ‘Santo Rosario’ had survived.  But she did, miraculously as always.  The extreme heat of the fire had bent, twisted, deformed, and in fact almost melted several of the important gold and silver objects.  But the 350-year old ivory and hardwood image of the ‘Santo Rosario’ actually survived the conflagration which had consumed her beautiful, rose-colored, Gothic-style temple from 1875 — the Santo Domingo church and convent in Intramuros, a masterpiece by the Europe-trained, patrician architect Felix Roxas Sr. — and it also finally laid waste to the historic site of her home beside the Pasig River since 1593.

Throughout the Japanese occupation and even after, only the outer walls and a part of the façade were left standing, all its interiors gone forever.

This issue has been pushed back for a month due to several reasons, some of which are beyond the editorial control.  We continue to receive below expectation for articles that might create balance content and widespread coverage, both from the Philippines and North America.  We still remain hopeful that many among us who are gifted […]