“Making Life A Little Sweeter”…does say our company’s slogan printed on almost all of our flyers, website, marketing brochures, product catalogues and even at the back of our business cards.

Since April 4, 2011, I’ve been working as corporate’s Supplier Quality Engineer, for Florida Crystals Corporation and later formed as ASR-Group Inc. in 2013.  The company’s internal opportunities opened its doors in my favor.  I seized the opportunity to travel to other countries while performing my duties as product/supply auditor.  The benefits are twofold.  Professionally it allowed me to perform my duties, add value to the company and grow my career, while at the same time it helped me accumulate my travelogue experiences and widened my travel horizons.  The exposure I have with various suppliers — Food Ingredients, Process Chemicals, Packaging Materials and even fertilizers —  is one of the vehicles where I was able to utilize my engineering education and experience. Those sleep-deprived nights, burning the midnight candle for finals or finishing a research on “Alcohol from Molasses”, have been paying off on every occasion I visited manufacturing sites. Without those founding principles in process engineering, I could never have technical understanding of every stage of operation in my audit of a manufacturing site.

As our company grows, so do our product lines. Our company pursues a dynamic vision to grow globally which resulted in tremendous expansion of our brand portfolio. Our NPD (New Product Development) department which was formed in 2013 has been unstoppable in our quest for excellence in sweetener products to put out in the market. We have various form of sugar cane products to different types of sweeteners, non-GMO and natural or organic. This brand growth led us to source out raw materials and ingredients globally. Once a material and supplier are identified, my role in the business kicks in, which is to qualify the material and the supplier. Many a times, this supplier qualification process warrants an onsite audit of the facility. Thus, it demands about 40% of my job traveling. The pursuit for best quality raw material that may be available globally, takes us as far as we could reach globally. 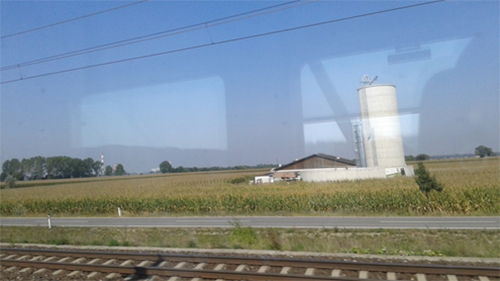 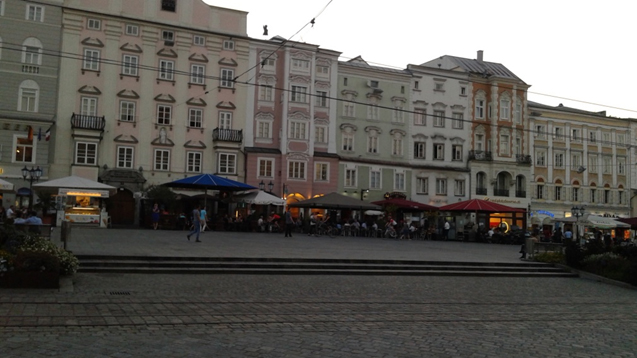 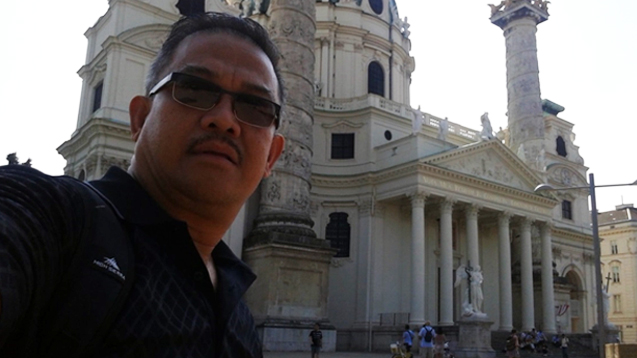 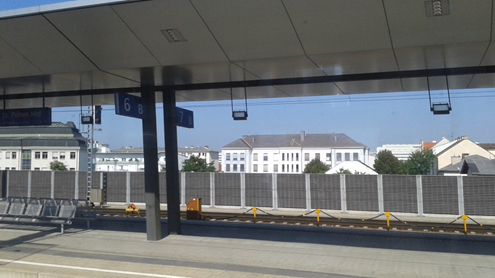 On September 13-16, 2016, I had the opportunity to qualify a supplier of organic ingredient whose manufacturing facility is in Austria. Yes, “making your life a little sweeter” does not stop there but we continue to provide one healthy product too, organic sweetener. Fortunately, Austria does not require a visa, so my US-American passport is good enough. Being aware of the language the country speaks, I need to familiarize myself with few basic expressions in German. Yes, Austria speaks German. Nevertheless, I am still confident that being able to speak English, the universal language, would guarantee me a flawless interaction with strangers or even interpreting signs that utilize English alphabets. My layover at the airport in Germany was quite a challenge. In situation like this, I always use common sense (as many of us would), looking for obvious signs/pictures or of anything that somehow defines a place or a facility. We all know that “when nature calls, we have to answer it!” I found a sign directing to a restroom though the language is in German, and the arrow points to the stairwell one level below. Common sense tells me to follow the sign, right? When I reached the ground floor, the sign was nowhere to be found. So, I ran upstairs again to take a second look at the sign. Do I look like I was lost, it seems but my bladder was about to explode. Down on that floor level, I saw a huge “WC” sign on a swinging door. I was alone on that floor. So, I decided to push the doors open and there I saw on one door a “Hommes” sign telling me that it’s for hombre or men. Who would know that a restroom is called Water Closet “WC” in German? Funny as it seems but it’s a first lesson learned! 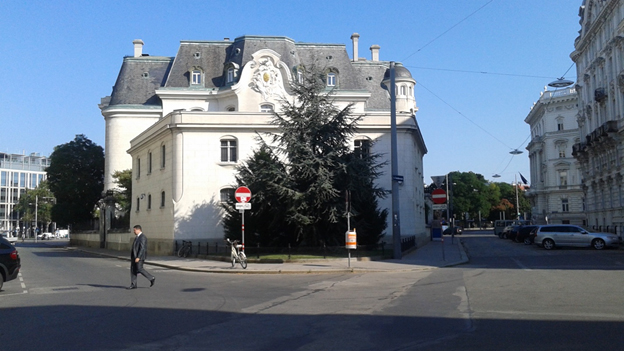 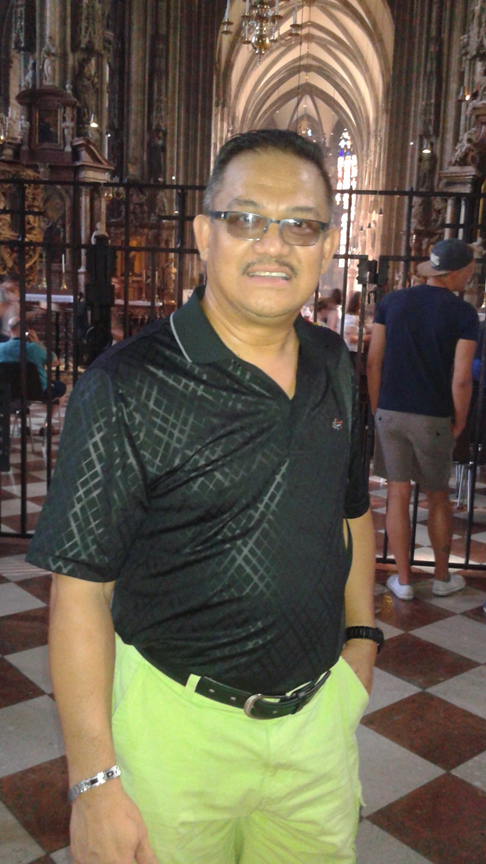 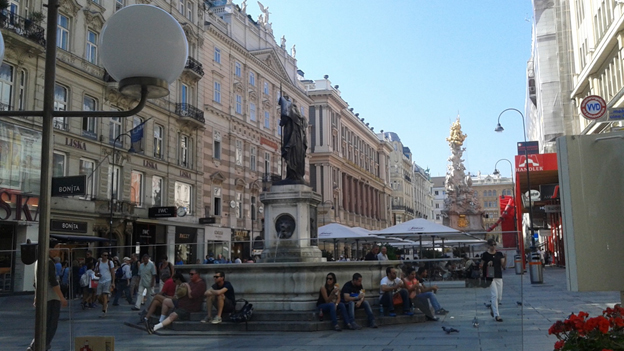 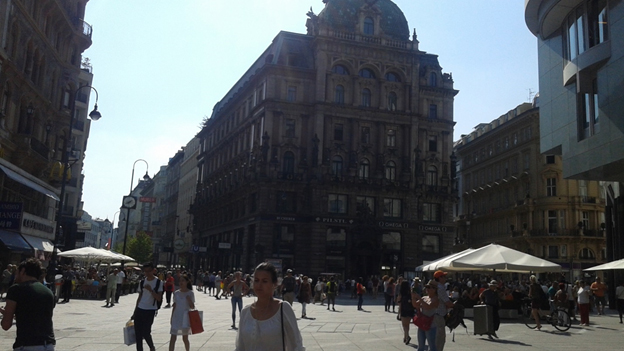 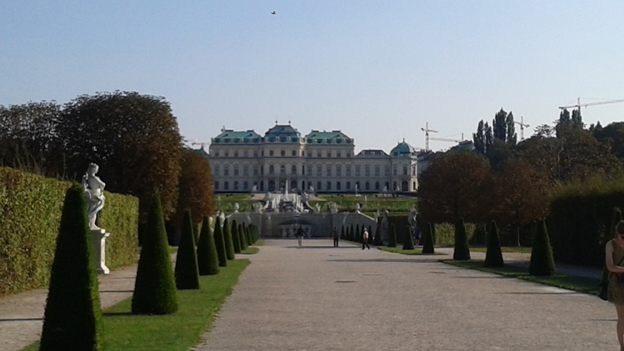 It was later then that my younger sister messaged me some common words to include in my international vocabulary, such as “Ausfahrt and Eingang” for Exit and Entrance signs, respectively. Hmnn… “aus-fahrt” – it sounds like flatulence. Indeed, I have to look for those words upon my arrival at Vienna airport so I can catch my train to go to Linz, Austria where I had my hotel reservation. The train ride from Vienna aiport to Linz lasted for about two hours. What a sight-seeing to behold for a tourist like me as the train rails from one city or village to the next! Through the train’s glass window, I enjoyed watching a picturesque landscape depicting the city’s agricultural resources where you find hundreds of hectares of corn plantation as far as your eyes could see. Or a prairie combined with plateaus where one can “climb every mountain” listening to the “Sound of Music” soundtrack. By the way, the iconic movie was filmed in Austria. 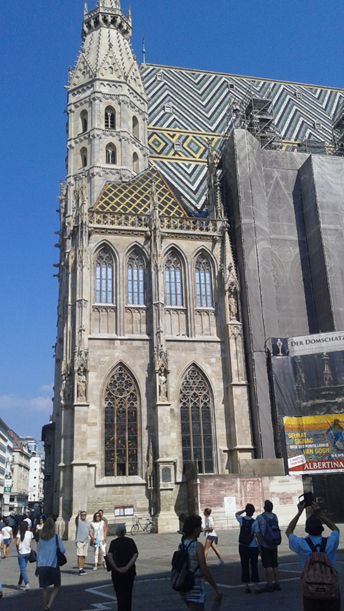 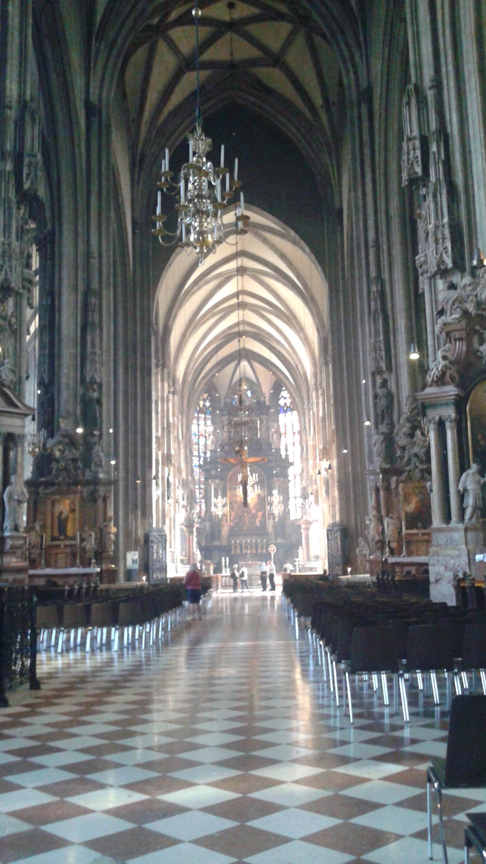 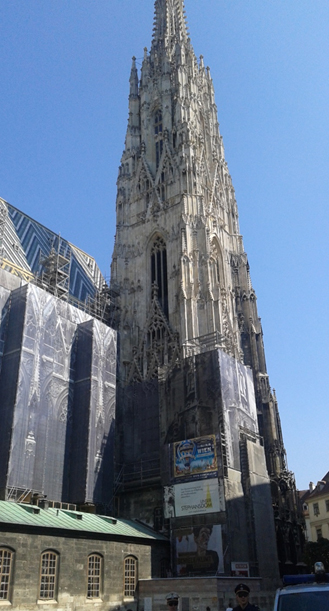 Luckily, on the train, there is an English translation after a German announcement as the train approaches its next stop. I have to stay alert and awake so I wouldn’t miss my stop station, Linz. The city is about 45-minute drive to the facility I audited. From the station, I took a cab to my hotel. I always made it a point to have a friendly conversation with a driver. This is my psychological strategy to gain trust and be amicable to strangers with some safety reservations.

This is one of common traveler’s tips. I was lucky that the cab driver speaks English. So, it was a safe and comfortable 10-minute ride to my hotel. Getting settled in my hotel room, I happened to contact a Filius who is based in Italy, Fray Tino Cultura. Luckily, he was in Vienna that time travelling with his employer. Without hesitation and with excitement, we set a date to meet in Vienna once my audit is completed. The rendezvous was scheduled. Fray Tino was generous and gracious to make himself available and be my tour guide. 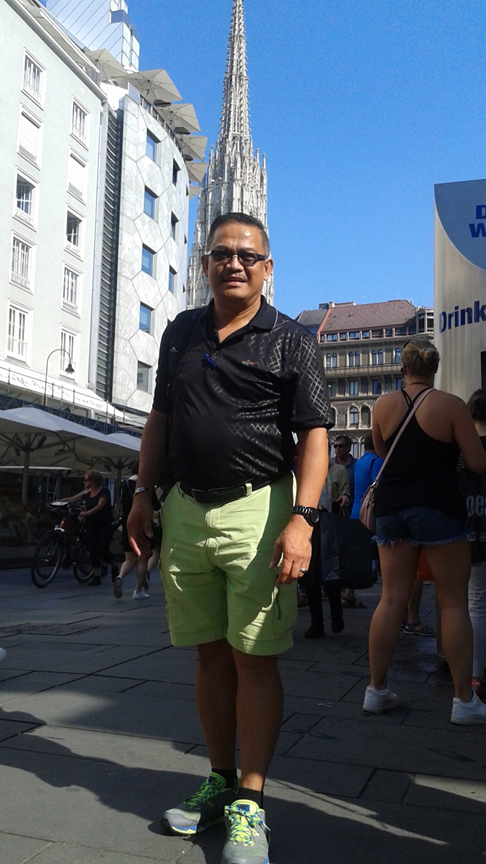 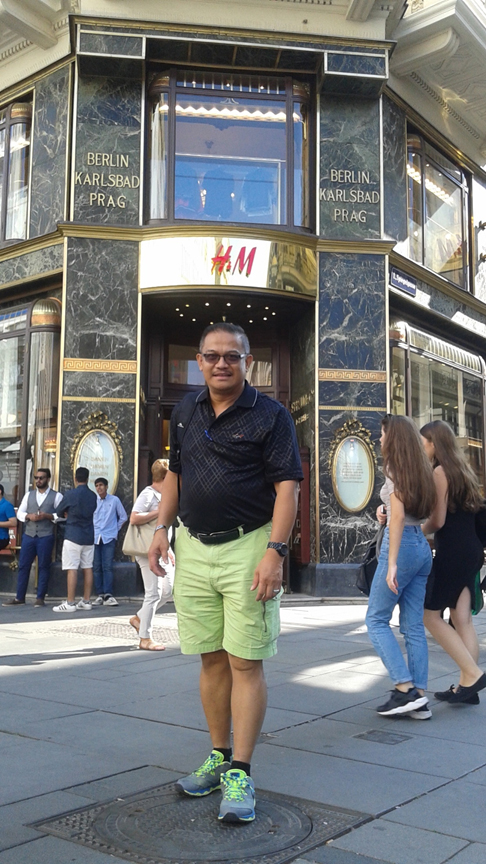 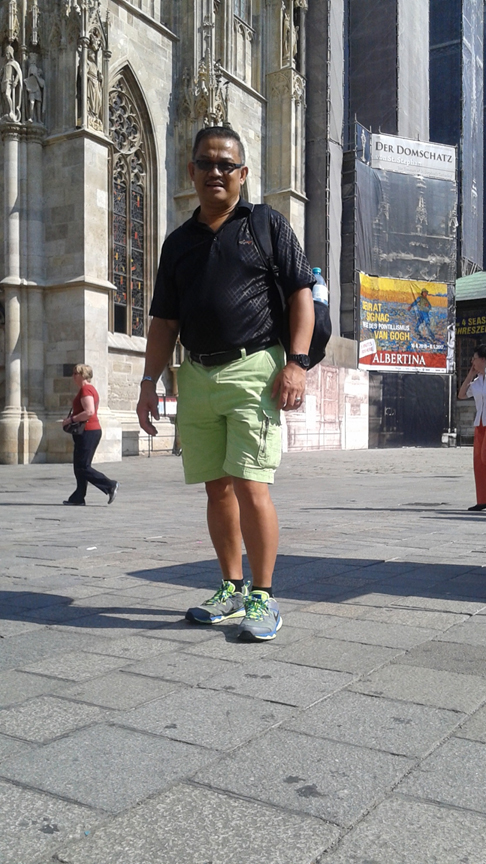 Vienna is a city full of history and culture. As we all know, the great composer, Mozart, established his career in this city. He was born in Salzburg, Austria. Fray Tino and I visited Mozart’s original school of music and across the street is the orchestra building where concerts are performed. With limited time to spend in Vienna, Fray Tino made sure that he showed me the most important places to see. Visiting the Emperor’s Belvedere Palace (Prince Eugene of Savoy) is one place not to miss. The Vienna Cathedral is a landmark that was included in our itinerary. The baroque, gothic and byzantine architectures are ones that mesmerized my art’s desires and admirations. Indeed, I had my fill in that short time exploring Vienna until I hopped on the train to go back to my hotel around 9:00 p.m. As Fray Tino and I discussed, I need to go back and extend my European exploration in my personal travel. Again, Fray Tino Cultura is always there to be my European tour guide. And let me invite FSDPI fratres to come along with me in the near future to schedule our EU tours to include Rome and France. Again, “Vielen Dank” Fray Tino for your hospitality and the opportunity of seeing you after 40 years or so. As in Italian, “Gracie!”

Celso Paguntalan
“Fray Celso” is a native of Calinog, Iloilo, Philippines. He joined the Dominicans in May 1976 belonging to the first batch of Postulants (a total of 13) who proceeded to completing A.B. Philosophy prior to vesting with the Dominican habit and acceptance to the Novitiate. He was the only “survivor” in that program who completed the Philosophy course as Class 1980 of the Philippine Dominican Center of Studies. He left the Dominican Order in November 1980. Thereafter, Celso in 1981 studied Chemical Engineering at the University of San Agustin, Iloilo, graduated Class 1985. Celso is married and they have two children. He was based in New Jersey from 1991–2011 before moving to West Palm Beach, Florida where he is currently employed at American Sugar Refining Group (ASR-Group) as Supplier Quality Engineer.

A lawyer, a priest and a politician hunt in the jungle and are captured by a tribe. The tribal chief asks the lawyer, “What do you want on your back for your whipping?” Lawyer responds, “Apply oil!”. So they put oil on his back and whip him ten times. When he is finished, the lawyer […]