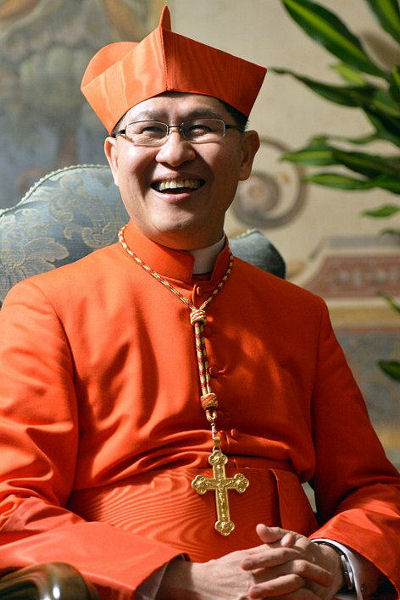 LUIS ANTONIO CARDINAL TAGLE, Archbishop of Manila, was proclaimed Peace Awardee for 2018 by the Rotary Club of Makati-San Lorenzo, on February 23rd 2018.  This was also in celebration of the 113th anniversary of Rotary International. Among its 6 Areas of Focus is Peace and Conflict Resolution. Here are some of my takeaways from his extemporaneous speech:

I – The work of making peace never ends. Peace is not the product of a completed process. It is constructed every moment, every day.

III – The seeds of peace are sown not only by designated officials of particular institutions, but by many, many more ordinary human beings in their everyday lives who show love and respect, render justice, and extend forgiveness to their fellowmen in their homes, workplaces, communities, and environments.

IV – Here are three examples of peacemakers that Cardinal Tagle met in his recent travels as president of Caritas International to areas of conflict and disaster and refugee camps for the victims of war and violence.

So, he asked himself if that was all his role was to these youth, and he worried that it seemed to be mababaw, or superficial. Until one youth told him he had kept the shirt Bishop Tagle had autographed the year before. He had not washed the shirt. Instead, he would fold it at night and keep it under his pillow.

He confided that his OFW father had been away for years, and when the Bishop cared enough to autograph his shirt, he felt he had met at least a surrogate father that cared enough for him while he waited for his real dad to come home.

The unintended act of kindness, done initially to humor what seemed to be a superficial request from an impressionable fan, turned out to be an act that brought peace to the troubled and insecure spirit of a fatherless young man.

The ways of peace are often simple, commonplace, and ordinary acts towards our fellow human beings. But they catch the heart and bring peace when they are done with sincerity, respect, and love.

Peace is the fruit of love and respect and fairness.

Jaime A. Cura
"Fray Jimmy" is a schooled educator, professional manager, and public communicator. He has served at the helm of various government institutions and private corporations. A former national president of the influential Chamber of Real Estate and Builders’ Associations, Inc. and the ASEAN Association for Planning and Housing, he is currently vice-chairman of the RGV Group of Companies and consultant to various real estate development companies. He has also served as trustee and vice-president of the Tourism Congress of the Philippines. Jimmy is also an active Rotarian of 38 years. He served as president of the Rotary Club of Rizal West in 1984-85 and, later, as Governor of Rotary International District 3830 in 2005-06. He is a Paul Harris Fellow and multiple donor of The Rotary Foundation. Jimmy is a frequent speaker and resource person in meetings, conferences, and seminars in or outside the Philippines. He has written many articles on Rotary topics and contemporary concerns. Jimmy has been married to Luz V. Cura for more than 40 years. They are blessed with three children – PJ, James, and Claudine. PJ is married to Frency Lacsamana, but still childless. James remains single. Claudine is married to Matthew Guerrero, by whom she has a son named Manolo Jaime Cura Guerrero, or Manu, for short.

“You are the light of the world. A city on a hill cannot be hidden. Neither do people light a lamp and put it under a bowl. Instead they put it on its stand, and it gives light to everyone in the house.  In the same way, let your light shine before men, that they […]

Tremendous effort and dedication manifested in long hours of seemingly endless writing, editing and re-editing of articles have been embraced by the editorial staff.  We took it with conviction and fortitude and probably honor as we stand by our words and rally for each other through hardships, trials and tribulations in driving our mandate forward.  […]