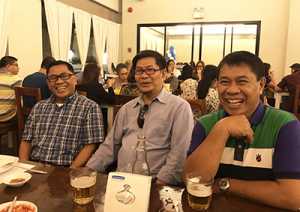 It didn’t take Medelianism philosophy for Iloilo Filii to figure out the best venue to hold a mini re-union and a welcome bash for fray Ted Fullona, a fellow Ilonggo who was on vacation and back in Dumalag, Capiz during the week of February 11th.   On short notice and under pressure in rounding up would-be attendees, Fray Lydio Pedregosa, the re-union moderator, did everything he could to muster the most turnout possible.  In the end, frays Lito Suyom, Lydio Pedregosa and his better half Annie, Cezar Matillano, and our philosopher Rolando Medel constitute the attendance in the mini-Filii reunion at Tatoy’s Manokan & Seafoods, in Atria, Iloilo City.  Tatoy’s was the overwhelming choice — a popular seafood restaurant in Iloilo City — it was recently featured nationally in the GMA’s mainstream Kapuso Mo Jessica Soho show. 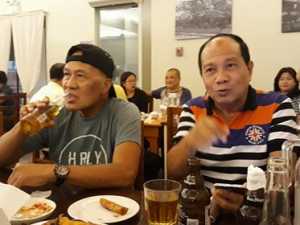 The timeframe was rather loose and early for an evening event, from 4:00 pm onwards, to accommodate availability of attendees and consider fray Ted’s return trip to Dumalag later in the evening.  Fray Lito turned up early, followed by fray Lydio and sis Annie, then fray Cezar and fray Rolly, respectively, within an hour.  Earlier, fray Ted met up with his relatives in Iloilo in the same venue, so it was not only for convenience that Tatoy’s was chosen strategically for, but more so for its popular menu offering dominated mainly by seafood entrees.

Hugs and handshakes preceded the most anticipated meeting of Ilonggo filii, albeit small scale.  Frays Lito, Lydio and Ted engaged right away in a lively conversation, while waiting for the arrival of frays Cezar and Rolly.  Frays Lito and Ted last saw each other in Letran back in 1976 during their formative year.  It spans a total of forty-two years for the two to be re-united but long absence did not factor a tad in a well-entrenched brotherhood.  Frays Cezar and Rolly finally arrived, so did the first waves of Sanmigs and piles of steamed oysters.  Ted’s wife, Mayette and his sister, finally joined in late as they returned from St Paul hospital where Ted’s sister consulted a family doctor. 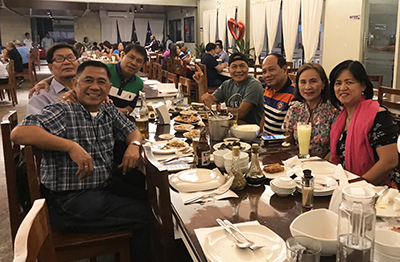 As the ladies got introduced, connected and engaged actively in a series of group conversations, the waiters arrived with servings of Tatoy’s popular menu – grilled squid, sizzling shrimps, grilled tangigue, grilled pantat, baked scallops, native chickens, adobong kangkong and mountains of steamed talaba.  In the next couple of hours the gang worked pleasurably trying to deplete plates after plates of Tatoy’s best seafood offerings, as bottles of sanmigs were siphoned empty one after another, fueling a vibrant exchange of pleasantries — wits and quips, jests and puns – among the Ilonggo Filii who never ran aground of topics.

It was finally time for fray Ted to say goodbye as the evening waned.  The reunion may have dissipated so fast in terms of time, but the brotherhood and connectedness they have for one another will never fade, wilt or wither through time.  In Filii, there’s forever!

The Fall and Rise of Dumalagnons

At the Roxas City airport, a guy who just arrived from Manila, asks a lady vendor, “Manang, saan po nakatira itong si Mrs Jasmin Fuliga?”, showing her a piece of paper on which the name is written.  “Fuliga? Ay ti, taga Dumalag ina siya” (She’s from Dumalag) the lady answers spontaneously in her Capiznon dialect, […]

Big Things Come From Small Ones

Reflections on the Quadricentennial Retreat of Letran 2020

I only had time to view and listen to the pre-recorded talks of our revered speakers for this quadricentennial retreat as part of the grand celebration of the 400th Foundation Anniversary of the Colegio de San Juan de Letran last night. After listening to their talks, I am now more convinced than ever that the […]