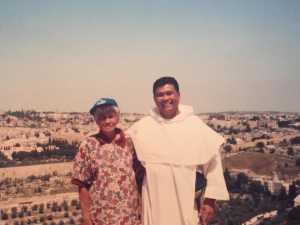 While Papa Gandong extended both hands, Jesus said, “Rejoice and be glad.”  Do you know what my Papa Gandong did that night before he died? He raised both his hands as if he was reaching up and as if someone was extending his hands invisibly towards him. Then, he clapped his hands three times; and smiled. How would I interpret it? If he was seeing something bad he would be crying and trembling with fear. God must be welcoming him in heaven and telling him to rejoice and be glad for your reward is great.  After my sister Beget gave Papa Gandong Ensure to drink, Papa Gandong told her, “I am going to sleep now so you may also rest.” Beget slept so sweetly that night. Early in the morning when Beget came to feed Papa, she found Papa sleeping so peacefully with a smile .

Papa Gandong died peacefully and happily. I believe so because he humbled himself many days before he died. He had a change of heart and mind. All he would say was thank you to all who have cared and have forgiven him. I have witnessed the sudden change in Papa’s health as he was getting weaker but his relationship getting better and winning everyone’s hearts to care for him. He is getting ready for eternal life. He became a changed person. I have come to believe that My Papa Gandong must have really missed my Mama Esting. That’s why this must be the reason why he immediately followed Mama after six months.

Last September 8, 2017 the birthday of Mama Mary, three months after Mama’s burial, we went to the cemetery to visit the tomb of Mama Esting.  While we were there Papa told my sister Beget something like this: “naglumoy su puso ko” (my heart feels her presence) . That was his realization that Mama is really gone. All the while he was still at the denial stage. There and then, Papa felt an internalization and realization of the care and love of my Mama Esting. They loved each other but negatively expressed it — different from the positive love that I said. Then, while we were still at the tomb of Mama, he pointed to the tomb beside where Mama Esting was buried and said “Beget I’ll soon follow and occupy that empty tomb.” Then afterwards, Papa dreamed about Mama and Gil in heaven; they were so happy.

I personally know my father very much. I have witnessed his conversion and change of heart. That’s why I would always visit him at home and get in touch with him. Everyday we would communicate through the phone and let him hear my voice with me attentive to his responses, that he may feel my presence electronically expressing to him, “Papa, I love you.” He would also respond by telling me, “I love you too, son.” I knew the happenings at home by my constant monitoring of his condition.

When he was stronger and living another life, we argued from time to time. I was actually supporting and defending my Mama Esting because they would always quarrel at home for reasons that some of you might have guessed. And after the heated arguments, I would beg for his forgiveness. When I asked forgiveness or felt sorry for the words I said, he would tell me “Ok kasi aki taka” (“It’s OK, you are my son”).

Papa knows how to forgive and understand. Papa is a deep thinker and a silent type, unlike me, talkative and expressively dangerous. But Papa accepted me as I am. He is my inspiration and I learned a lot from his experiences and teachings. Papa had an attitude of listening because he is a learned person. He was also a spiritual person. In his testimony that I published in YouTube (search Papa Gandong Testimony), you will find that his relationship with God was internal and spiritual, not so much external and religious.

My Papa Gandong, among his siblings, was the only one who finished his studies. He worked hard to pursue his dreams. He got what he wanted in life. My Lolo Fermin Asor made him in-charge of the 100 hectares in Tinambac, Camarines which he relentlessly settled in court. He was so responsible and dedicated person. He made it happen by his dedication and intelligence. The first word he taught me when I was a child was the word “dedication” . He was the financial secretary of the Knight of Columbus for several years and  an acting mayor of Tigaon, Camarines Sur twice.

Last December I got the feeling that my father was going to leave us soon. That was why I told Beget, Glecy, Ada, Sarah and Carmela and my other cousins to really do everything for Papa because he may not last long. I told them to give to Papa all the best we could give. I even told them to P.E.T Papa. P stands for Prayerful Presence. E stands for Expressing Efforts and T stands for Thanking Time. If we can PET Papa, we will have no regret. Neglecting to PET may cause us to be sorry, not happy. That was why I was with him every now and then especially last Christmas when I asked him what his gift for me was. It was a perfect Christmas to spend time with you. He replied “love”. 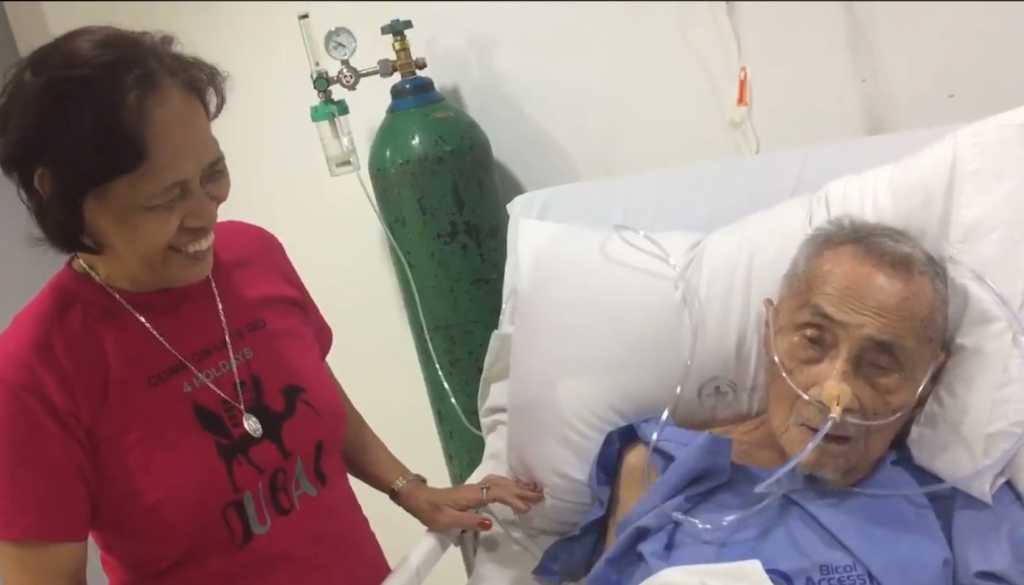 Beget and I were always present for Papa especially when his retina was operated on.  We were frantic when Papa needed blood for transfusion several years ago. Beget really made efforts for Papa though she was suffering from her arthritis. She would sing a love song to Papa while feeding and doing chores for him. Beget fed Papa not only food but grateful love because he would always ask Papa to repeat words like “I love you” to tickle the mind of Papa. We did the best we could to make our father leave this world ready and prepared to welcome God. I would hear his confession, gave holy communion, administered him with the Sacrament of Anointing of the Sick,  prayed over and blessed him . All we could do was to let him be prepared and ready to meet the Creator. 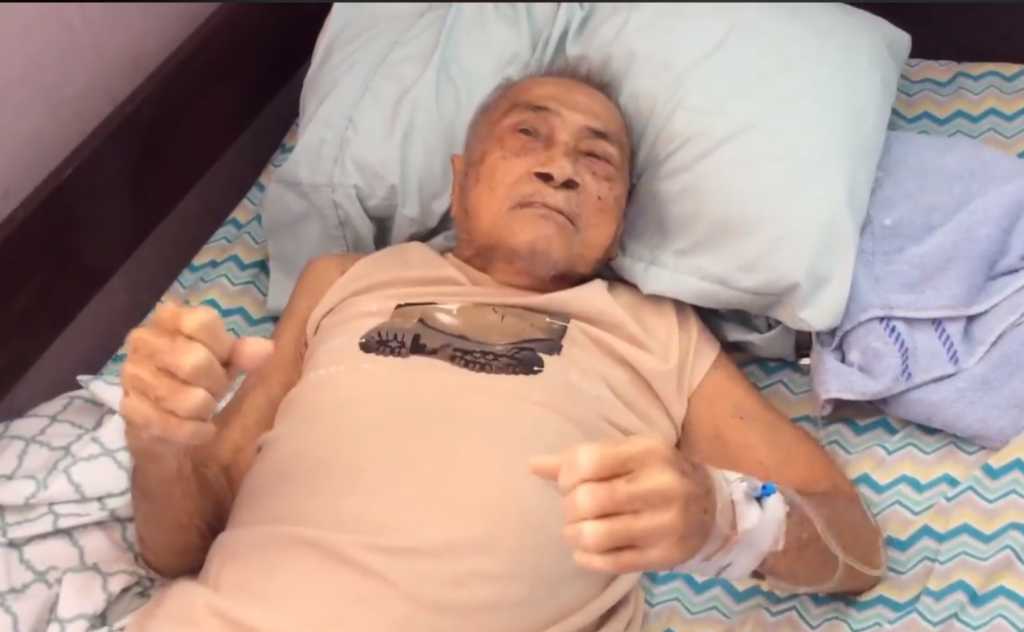 Last September, before I attended the United Nations Session of Human Rights in Geneva, Switzerland, I visited him to pay respect and say goodbye.  He told me “God be with you Son.  Take care of yourself.’  Now my farewell words to Papa are the words he told me when I left him for the United Nations in Geneva. “God be with you Papa Gandong. God will take care of you in heaven.” Thank you for being Papa Gandong, a person of gratitude and a changed one before leaving this world.  You left us a legacy and a happy memory. We will always remember you in our prayers and your picture will hang at our house and in our hearts. Both Papa Gandong and Mama Esting remind us that we are dearly loved and are always cherished by their presence. You are always present in our minds and our hearts. Forever you will be our Papa Gandong and Mama Esting. Eternal rest grant unto you both. May you now rest in peace with our Loving Creator God.

Top 10 ways to secure your data while traveling

The advent of the Holy Week in the Philippines herald the start of the travel season, especially since most schools have not yet adapted to the September school opening.  For countless among us, our smartphones and laptops are a must-bring to make our travel productive and memorable.  Be it taking selfies or walk-about vlogs, video-conferencing […]

Dearest One, Legend has it that Saint Valentine wrote a letter to the daughter of his judge before his execution.  I call it the first Valentine’s Day letter.  Before the advent of commercialism, people have greeted each other on Valentine’s Day through letters.  It’s been a long time since I wrote my last love letter. […]

Filii Sancti Dominici Philippinensis (International) “A rose by any other name would smell as sweet,” so did the Great Bard opine about this primordial question.  Anyone hearing for the first time FSDPI’s formal corporate name would almost instantaneously inquire, “What in heaven’s good name do those words mean?”  As with most words, the etymology of […]