The Soccer Champions of 1976

Forty two years ago, some members of the Dominican postulancy in Manaoag, Pangasinan, Philippines made history by winning the 1976 Region I,  Ilocos Region Athletic Association (IRAA) Soccer Championship.  It was possibly the best year in competitive sports of Dominican seminarians in the Philippines if not in the world.

The small basketball court of the Manaoag convent probably prompted some of us to try soccer  during our recreation time.  Fray Earl Marasigan remembered Fr. Navata showing us some soccer skills back then.  Fr. Rey Adalid, OP, our Postulancy Director fully supported our team and registered us to play for the Municipal of Manaoag Championship as Out of School Youth, (OSY).

The whole Dominican community involved itself from the get-go. The older ones who can’t compete served as coaches, water boys, and cheerleaders.   Part of our preparation was to run from Manaoag to Laoac, a 12-mile run (back and forth) to build our stamina.  We had a satellite parish in Laoac and the late Fr. Nacion, OP (+) was the parish priest. He used to refill our water supply at this stopover.  We also had the help of our volunteer coach John, a US Peace Corps member. 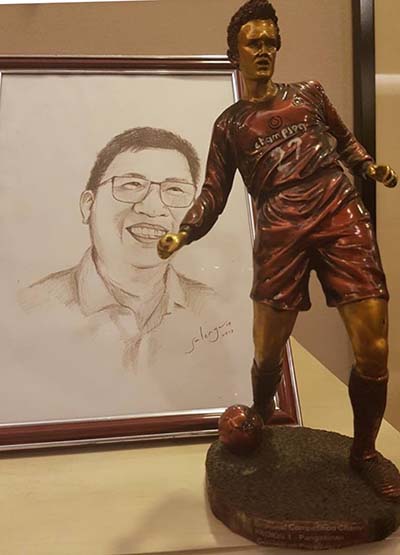 Mike Plana, Earl Marasigan, Raffy Cipriano (+), Julio Castigador, Peter Nunez, Roger Estorque, Goody Rueda, Butch Bombase and Ace Serrame (+) were the team members. Of these 9 players, the last 4 became priests, and the first 5 left the seminary and are members of the Filii and call themselves “Frays.” I hope I haven’t omitted any player and if I did, my apologies.

Of the many games we’ve played to attain the Title at the beginning of this article,  one game stood out.  It was our perfect game.  It was the championship for the Province of Pangasinan.  After winning the Municipality of Manaoag Championship and the District Championship, we played for the Provincial Championship in Lingayen.  By this time, we became a well-oiled soccer team. Each player knew the strengths of everyone and  played with so much trust and skill.  We became almost unstoppable.  At this particular game, we scored 4-0.  There were two goals I couldn’t forget:  one was a header from an excellent corner kick by either Fray Mike or Fray Earl and another was a feed close to the center of the penalty area which passed between the legs of the opposing goalie onto the net.  I can still  imagine the smirk on my face after that goal.

We suffered our only defeat in the hands of the team from Baguio.  Had we won this game, we would have gone to the National Championship.  Composed mainly of the children of US military personnel, we were probably a bit shocked by the size of our opponents. It was our first time to compete against foreigners. We held our own however, because the game ended on a scoreless draw.  Unfortunately, we lost on penalty kicks.  I remember missing that penalty kick way over the goal.  It was a sad day.  It felt like the sky fell down hard on us.  I remember Coach John tried to console us with the story of Job.

Fray Earl said it was good to realize that our seminary life wasn’t limited to just prayers and studies.  We were actually involved in sports and in the community. I tried to reach out to Fray Mike who was one of our ace players to get his perspective on this unique experience but wasn’t successful.  I am sure he has a lot to say because he was even offered to play for the national championship but Fray Earl said he declined.  He preferred the “Dominican habit than football.” As for me, this experience has taught me among other things the value of being a team player, of developing an important skill, of sports, of cooperation, of can do attitude, of excellence, of sense of accomplishment, and  of the joys of winning and the pain of losing.  These lessons have been useful to me in my career.

It is my hope that one day, the remaining members of our soccer team be reunited and play one more time in our uniform bearing our original numbers. It is my further  hope that our young  readers be inspired by our story and embark on something special and become good at it.  We really cannot and do not know how good we can be until we try.

Peter Nunez
"Fray Peter" heeded the call to the priesthood right after high school. Upon completion of his temporary vows of poverty, chastity and obedience in the Order of Preachers (Dominicans), he realized he had a different calling and so he ventured out into the world. At first, he made a lot of mistakes from which he learned. In 1992, he joined his wife Alicia in the U.S. They were blessed with two fine sons, Stephen and Michael and “adopted” two wonderful daughters Pau and Joni. From them, he has 4 grandchildren. He started his professional life in the U.S. as a part-time teller and after 6 years was promoted to Branch Manager of the Bank of New York in their two branches in New Jersey. He also joined the North Fork Bank as Branch Manager with the title of Assistant Vice-President. He was a member of the National Association of Securities Dealers (NASD) which authorized him to sell various investment products. As a side hustle, Peter is working on his photography skills and has co-founded "The Traveling Chefs." Peter enjoys reading, writing, cooking, travel, golf, photography and triathlon.
http://thetravelingchefs.us

Passwords have been around since time immemorial as a way of user identification, identity authentication and as a way of gaining access to a restricted resource. The Greek historian Polybius has discussed in detail how passwords, or quite specifically, “watchwords” were used by the Roman military in the changing of the guards, thus protecting from […]

We Reap What We Sow

The 2018 Sinulog Festival in Carmen, Cebu

The rhythmic sound of drum beats emanating two blocks away from where we stand begins to vibrate.  As the sound gets closer and louder, you can sense the excitement on painted faces of spectators and revelers — boys, girls, men, women, seniors — aged from as young as two to as old as one can […]