“A rose by any other name would smell as sweet,” so did the Great Bard opine about this primordial question.  Anyone hearing for the first time FSDPI’s formal corporate name would almost instantaneously inquire, “What in heaven’s good name do those words mean?”  As with most words, the etymology of which are rooted in the Latin language of old — Latin incidentally is still considered second tongue within the hallowed walls of the Dominican scholastic institution or “Studium” — FSDPI, or more affectionately the “Filii”, translates as: “the sons of Saint Dominic in the Philippines”.  It is an organization of men, brothers in faith, who have undergone and received formal religious training in the Dominican life and Spirituality under the Dominican Province of the Philippines.  We form a community of men who have willed to continue to profess, live and share, in the world of the laity, the apostolic vision and mission of our blessed father St. Dominic de Guzman under whose patronage the “Filii” is entrusted under.

We may not have been chosen from among those who answered the call to work in the Lord’s vineyard, nevertheless we commit ourselves to the Dominican apostolate in accordance with our way of life.  We have envisioned ourselves to be a strong partner of the Dominican Province of the Philippines, where the institution resides, in communion with the Dominicans in general and Holy Mother Church, in their apostolic ministry of evangelization, by living an authentic fraternal communion, 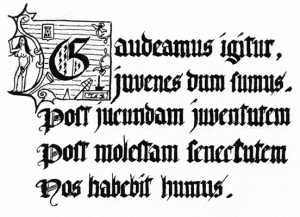 animated by the particular Dominican charism and by our personal witnessing of Christ the Preacher in the midst of the world and its concerns.

From earliest recollection, and perhaps unknown to some, the roots of the Filii did not merely start from a beginning; it began way earlier with a ragtag group in search of a beginning.  It all started rather unofficially from the well-loved moniker reminiscent of pre-90’s Filipino People Power age that was “EDSA”, which curiously stood for “Ex-Dominican Seminarians Association”.  It then evolved into some sort of professional alumni club toasting at the end of the day to the tune of “Gaudeamus Igitur”, following the tradition of carpe diem with its exhortation to enjoy life.  The name by then was updated to “xOP”, which on one hand, refers simply to “Ex-Order of Preachers”, a more inclusive term considering some who left the Order have persevered into the priesthood.  On the other hand, and for some who strongly ascribe to the adage “in vino veritas”, “xOP” also stood for “Extra Old Pale”, depending on one’s taste for that “heavenly” drink, or more realistically when outside moderation, the drink that brings you to heaven, depending on one’s own predisposition to the otherwise eau de vie.

On a somber note, the seeds of Filii could be traced to that night of June 17th in 2004 when most of its alumni gathered to mourn the passing of Fr. Romeo Asuzano, O.P., who in one way or another has touched the lives of not a few among Filii’s members as classmate, friend, teacher, confessor, confidante or by just simply sharing the same Dominican zeal.  Fr. Romy may have provided us that needed impetus to formally gather and be counted as one body. It was never an easy task for it took almost two years to formalize the structure of the group, gather its members across borders and elect its leaders.  It came to fruition on April 22, 2006 when finally the organization was formally launched as the Filii broke bread together, just as Christ had done with His followers just before the Great Commission. 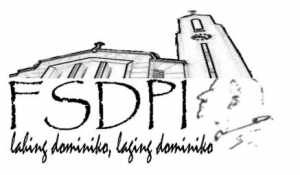 FSDPI — the Filii, in my opinion, has been a great undertaking, considering that not all who left the confines of the seminary or convent left happily or with a peaceful heart. For the most part, we have learned that a number of them left with a grudge and never looked back. But through the warmth of friendship; the honest invitation to help build a dream to bring together members from all around; the self-sacrifice of our founder members; in 2009 with the first-ever 3rd year anniversary homecoming, we managed to pull through a daunting task: we’ve healed memories by bringing members back to Santo Domingo and the Coristado or whatever remained of it for them in their subconscious. Many felt a tug at the heart hearing the messages of our founder members and elders, how we reached far and wide in search of belongingness in the spirit of brotherhood and the love of a life we once lived; for underneath the character we may have tried to reinvent in a material world, the indelible mark remains: that of being a Dominican.

*This Tagalog phrase can be loosely translated as “once a Dominican, always a Dominican.”

Finding Grace in a State of COVID

I have not had an entry in my personal diary for so long.  The significant years of our migration to Australia starting the year 2005 have been lost in the pages of my memory, and I’m trying to retrieve them especially in these slowest of times: longer nights and shorter days in winter, curled by […]