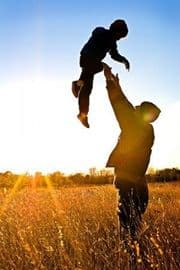 All these years, I never really appreciated Father’s Day for the simple reason that I thought it didn’t apply to me for the longest time until about nine months ago when I finally had a son myself.  I never thought of the folly of it until I came about a quotation from Clarence Kelland that says, “My father didn’t tell me how to live; he lived, and he let me watch him do it.”  For one, I never heard my father tell me anything; nor did he live — heck, he simply dropped dead before I turned one; and for me, that is quite unforgivable.

Our artistic penchant for the dramatic has railroaded this otherwise unique experience to ubiquitousness.  Too many TV soap operas and countless movies have capitalized on this unfortunate incident where a promising scene is shown, of a young family being happy together, only to have misfortune fall on them when the head of the family suddenly dies in a tragic accident and leaves the young mother to tend solely to her helpless kids.  One too many, it seems, that I’m afraid we’re fast creating a society of dead fathers and martyred mothers.

One particular TV soap opera that I saw as a young boy was a Philippine-made drama series called “Gulong ng Palad” (freely translated as “Wheel of Fate”) and subconsciously appreciated it because I was able to relate.  It did not help that I grew up in a family with a dysfunctional set up in the first place: in a home where the person I called mom did not bear me in her womb, and the person I referred to as “nanay” lived with another family of strangers elsewhere. Much earlier, my father suddenly dropped dead in all of nine months of having me, then appeared out of nowhere in my preteen years via a phantasmic nightmarish dream-like fancy to embrace me as if in a loving reassurance, but which only caused a distressing anxiety symptom that manifested in my waking up after midnight with cold sweats and an utter fear of nothing in particular.  It just simply did not make sense; if he knew better, those experiences are beyond a child’s comprehension at that early stage of wonder. Add to that the smell of jasmine in those ungodly hours that left me utterly terrified of being left alone in the dark, I had to lay beside somebody else just to catch the good night fairy’s gift of slumber until I was in the fifth grade.  At least I knew that he loved me, enough to scare me breathless.

Somehow I sense that “fatherhood” runs both ways.  It’s something you cling to as a helpless boy in need of protection, and something that transforms you in later years since I do believe, that until you have a child of your own, you will never know the joy, the love beyond feeling that resonates in the heart of a father as he looks upon his kid. You will never know the sense of honor that makes a man want to be more than he is and to pass something good and hopeful into the hands of his offspring. And you will never know the heartbreak of the fathers who are haunted by the personal demons that keep them from being the men they want their sons to be. I’m way past the first point, for I was already an adolescent when I realized what I missed: I felt envy and regret whenever I see other boys with their fathers and I see myself always sadly walking away.  I was frustrated at the pains and brokenness that happened before me.  My mother, in all her simplicity, failed to define the word “father” to me.  I felt so empty more than empty.  It was a vacuum – nothing was in it but nothing could fill it up.  That frustration rose up to a point where I promised myself: If I were to be with a child, I would love him/her in a way I never experienced.  Now, fatherhood beckons once more, but I risk running into that soap opera dilemma: where the sooner I decide to give fatherhood a chance to heal memories and exorcise the inner demons of regret, that I myself suddenly hit a tragic end unable to fulfill a promise to hand and to hold; by then the wheel of fate would have definitely turned full circle.

Perhaps it’s one major reason why I once dreaded intimacy however much I desired it, and people always see me suddenly withdrawn at the slightest hint of amorous intention.  Funny, because all those times, I always sleep pretending I lie there with my arms around her (it’s a generic femininity, by the way)… but I think it’s just an excuse for something more profound… because every time at daybreak, at the corner of my eye, I always see the reflection of that cute little angel moving ever so slowly into the room; ever so lovingly nudging my foot to check if I’m awake; and as I turn my gaze, marvel at that sweet smile that could equal the light of a million mornings–it never fails to melt my heart.  “Can I stay beside you?  Cuddly-bear huggy?”  Pretty little thing, how could I ever refuse those butterfly kisses?  But it’s not that prospect that I’m afraid of; I dread the day that I face, against overwhelming odds, that despite the string of successes that I have so far had…that for this once, I would have simply failed.  And I wouldn’t be able to live with that…nor die with it.

My father died many years ago, and yet when something special happens to me, I talk to him secretly, as a young boy would, not really knowing whether he hears, but it makes me feel better to half-believe it, until such time I find the strength to run the imminent risk of finding and eventually losing.  Drama may have relegated my father to a dead society; it’s the same drama that sends this fatherhood concept to a dreadful longing, unwilling to commit the same mistake again of not living for far longer.  But then I realize that my father dropping dead should not define fatherhood for me, for after all, in a society of dead fathers, you must never find fault with the absent.

So to all who may have been blessed with fatherhood that runs both ways, have a truly happy and meaningful Father’s Day; realize that you have found the pearl of great price, cherish it and never take it for granted.  While you were once a child, heaven is fully defined in the eyes of your own.  It’s not enough for you to provide a name, much of it depends on the affection that only a father could give; for, after all, it is not flesh and blood but the heart which makes us ever so worthy to be fathers and sons.

The 2018 Sinulog Festival in Carmen, Cebu

The rhythmic sound of drum beats emanating two blocks away from where we stand begins to vibrate.  As the sound gets closer and louder, you can sense the excitement on painted faces of spectators and revelers — boys, girls, men, women, seniors — aged from as young as two to as old as one can […]

When will the Church would realize video games “unfulfilled potential”? Community quarantines makes us prisoners in our own homes. So to escape boredom, we need to rethink our activities, revise our schedules to keep ourselves busy again. Keeping busy does not mean working all day long, but somehow making our work a play. For some […]